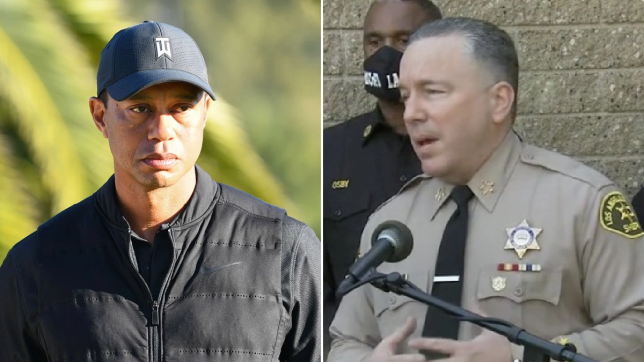 The golf superstar was ‘calm and lucid’ despite his significant leg injuries (Pictures: Getty / ABC)

Tiger Woods showed ‘no signs of impairment’ following his car crash on Tuesday according to LA County Sheriff Alex Villanueva, with the golf icon conscious and ‘calm’ when he was pulled from the wreckage.

The 15-time major champion was extracted from the crash by firefighters following a ‘single-vehicle rollover’ accident and was brought straight to hospital to undergo surgery.

Woods’ condition is not life-threatening and his agent, Mark Steinberg, confirmed that he sustained ‘multiple leg injuries’ in the incident. 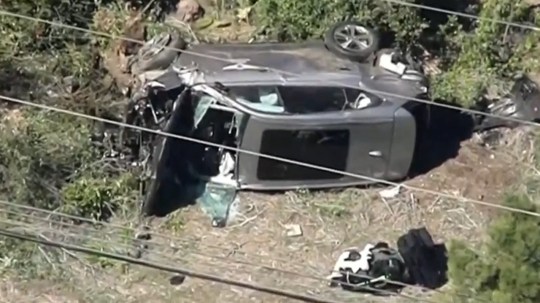 Woods had to be pulled out of the car through the windscreen (Picture: WLBT3)

The 45-year-old was involved in a car crash in 2017 when he plead guilty to driving under the influence, having had five drugs in his system, but LA County Sheriff Villanueva does not believe Woods was impaired in Tuesday’s accident.

‘We arrived on the scene at 7:18am and discovered a solo-vehicle collision and the sole occupant was Tiger Woods,’ explained Villanueva at the Lomita Sheriff’s station on Tuesday afternoon.

‘Deputies at the time did not see any evidence of impairment or anything of concern. Obviously life-saving measures had to be taken for the occupant of the vehicle.’

Asked if there was any sign of impairment, Villanueva replied: ‘No evidence of impairment at this time, but it will be subject to the investigation.’

Asked what impairments they looked for, he continued: ‘We’re looking at signs of being under the influence of either narcotics, medications, alcohol, order of alcohol, all these different things that would give you an idea in their behaviour but there was none present.’

Asked if Woods could have fallen asleep at the wheel, he added: ‘Now we’re going beyond what we have at the time, so the investigators will have to figure that one out.’

The Sheriff’s department confirmed that Woods was conscious when he was rescued and able to identify himself, while he had been wearing his seatbelt, with Deputy Carlos Gonzalez, one of the first on the scene, describing what he saw when he arrived.

‘Unfortunately, Mr Woods was not able to stand under his own power,’ he explained. 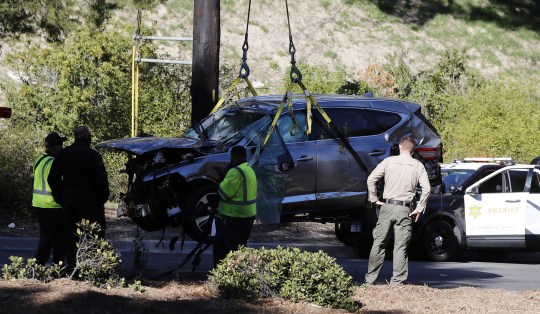 ‘Our partners at LA County Fire Dept were able to extricate him from the vehicle and they put him on a backboard.

‘When I arrived on the scene Mr Woods was seated in the driver’s seat, I made contact with him and ensured he was able to speak to me.

‘At that time it seemed he was still calm and lucid, I made the determination that it would be safer to wait for LA County Fire to help remove him instead of trying to remove him myself. I kept Mr Woods calm until LA County Fire arrived on scene. 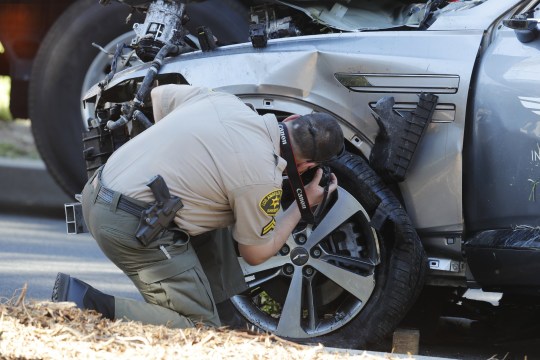 ‘I spoke to him, I asked him what his name was, he told me his name was Tiger and at that moment I immediately recognised him.

‘I asked him if he knew where he was and time of day just to see if he was oriented, he seems as though he was lucid and calm.

‘He didn’t seem concerned by his injuries at the time, which is not uncommon in traffic collisions, many times people tend to be in shock, it’s a traumatic experience, so it’s not uncommon for people to be focused on unimportant things or even if they are in pain they might not feel it until later.’

For more stories like this, check our sport page.