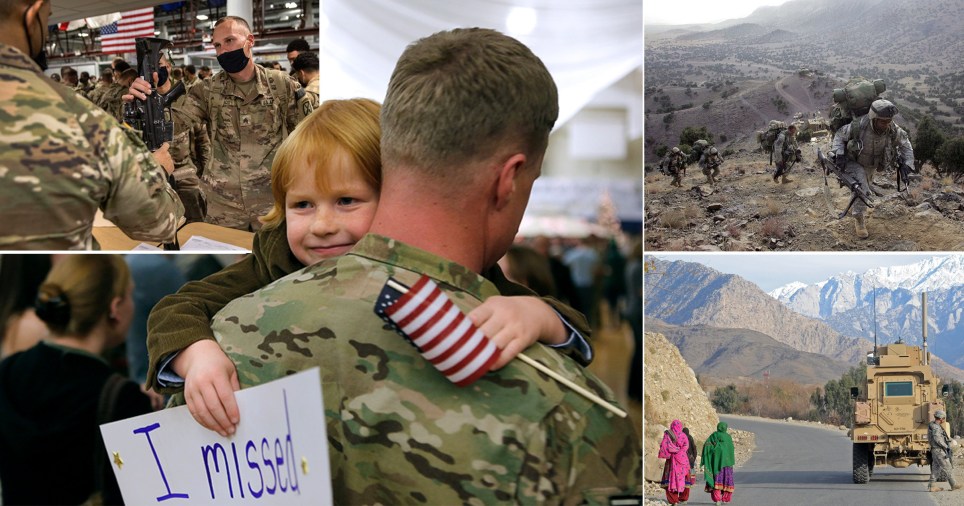 2,500 US troops will be withdrawn from Afghanistan between now and September 11 (Picture: Getty)

After 20 years and the loss of more than 2,300 American lives, the removal of US military forces from Afghanistan has officially begun.

The White House announced last night, Thursday, that just under 100 troops have already been withdrawn from combat zones in the war-torn South Asian nation. It signals the beginning of the end of ‘America’s longest war’, which at its peak, in 2011, saw around 100,000 US soldiers based in Afghanistan.

Earlier this month president Joe Biden announced his plans to withdraw all of America’s remaining 2,500 troops from the country by no later than September 11, the 20th anniversary of the most devastating terrorist attack on the nation.

The war has taken an estimated 3,500 coalition lives, an unknown number of Taliban fighters and thousands of innocent Afghan civilians.

He said: ‘While these actions will initially result in increased forces levels, we remain committed to having all of US military personnel out of Afghanistan by September 11 2021.’

Fewer than 100 troops, along with military equipment, have been moved by aircraft following president Biden’s announcement on April 13, reports CNN. The 78-year-old’s executive order stated that the withdrawal process should start no later than May 1.

However, government and defense officials are concerned about its troops coming under attack from Taliban forces during the withdrawal, and so the Pentagon has sent additional military equipment, like armored vehicles, to Afghanistan to help protect the American soldiers. 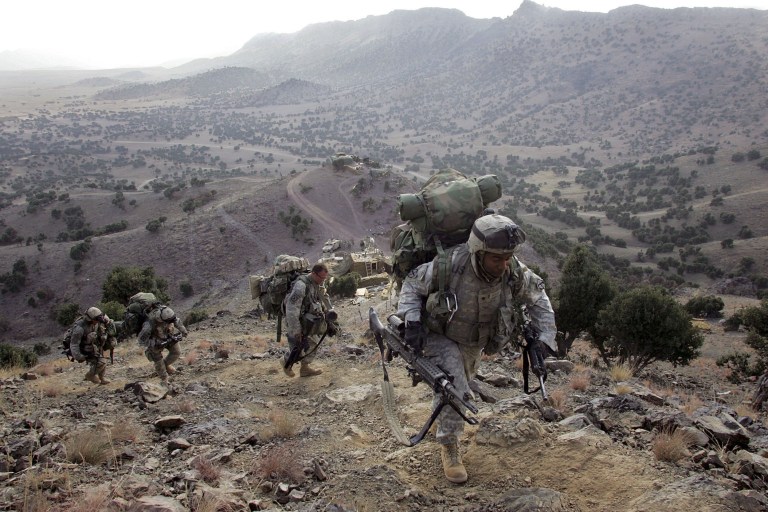 US soldiers from the 2-87 Infantry climb towards a forward observation post October 20, 2006 overlooking the Afghanistan-Pakistan border (Picture: Gett) 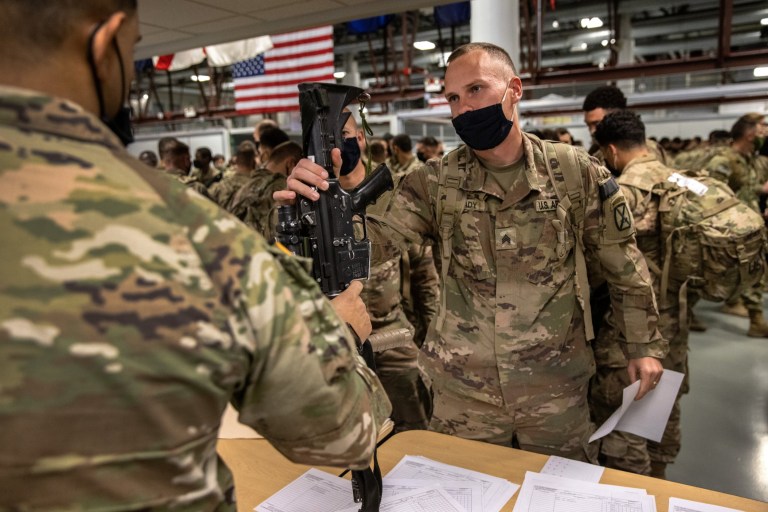 US Army soldiers turn in their weapons after returning home from a nine-month deployment to Afghanistan on December 10, 2020 at Fort Drum, New York (Picture: Getty)

Chairman of the Joint Chiefs of Staff, General Mark Milley, called the withdrawal ‘a complex operation and not without risk’.

‘We have begun a deliberate coordinated responsible retrograde of US military personnel from Afghanistan. This is a complex operation and not without risk.

‘And it will unfold over the coming weeks’ General Milley said in a statement to CNN.

In his first address to Congress on Wednesday night, Biden argued that ‘war in Afghanistan was never meant to be a multi-generational undertaking of nation-building’ as he defended his decision to bring the troops home.

The president added: ‘We went to Afghanistan to get terrorists – the terrorists who attacked us on 9/11 – and we said we would follow Osama bin Laden to the gates of hell to do it.

‘And we delivered justice to bin Laden. We degraded the terrorist threat of al Qaeda in Afghanistan.

‘And after 20 years of value, valor and sacrifice, it’s time to bring those troops home.’ 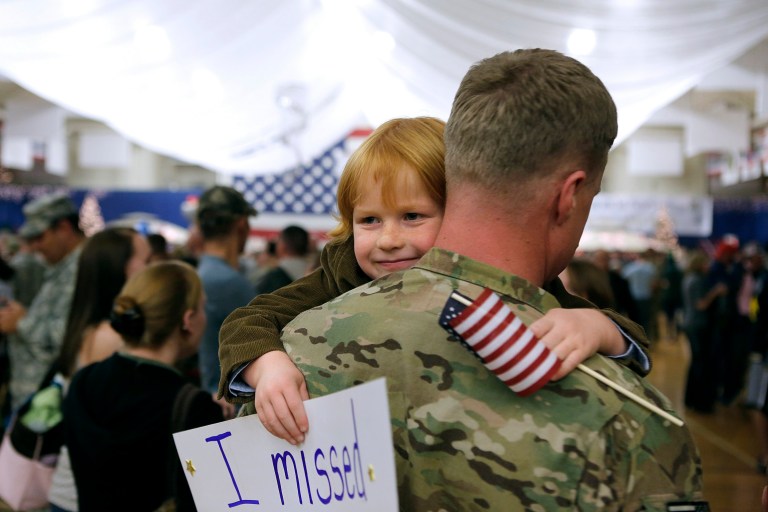 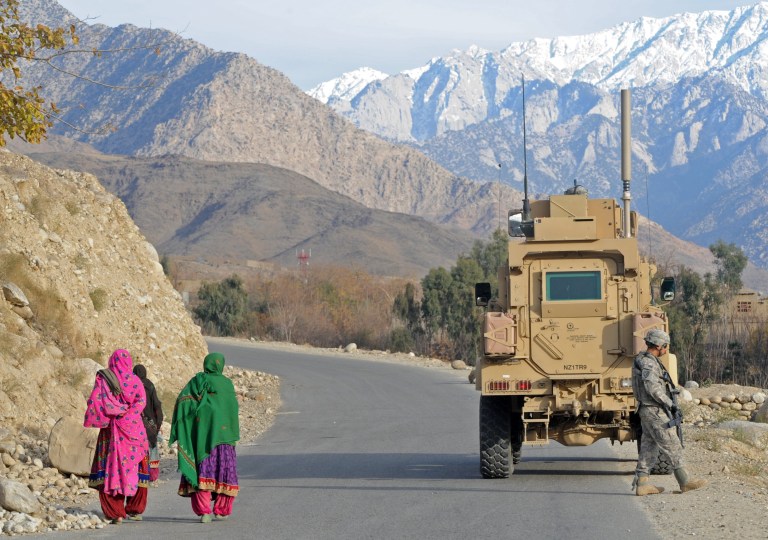 Afghan women walk past US soldiers on patrol in Nuristan Province on December 18, 2009 (Picture AFP/Getty)

The invasion of Afghanistan was part of George W Bush’s so-called ‘war on terror’ and was triggered by the September 11 terrorist attacks in 2001.

Over the past two decades, the US has attempted to eliminate militants in Afghanistan and stabilize the government with democracy.

There have been about 2,500 US troops in Afghanistan in recent years, plus several hundred additional special operations forces. All of them will depart under the President’s orders.

Biden’s withdrawal timeline breaks the deadline proposed by the Trump administration last year. According to that deal with the Taliban, all foreign forces would have had to leave Afghanistan by May 1 2021.