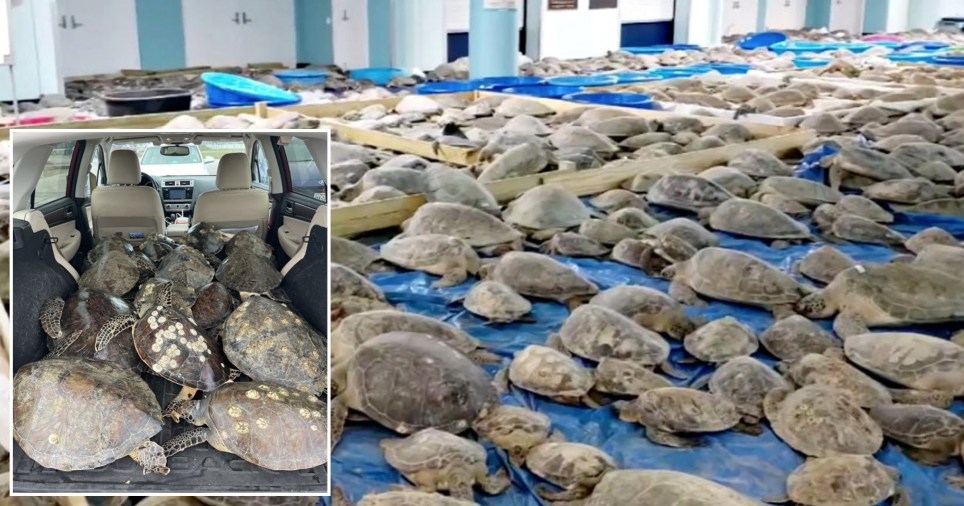 Turtles being stunned by cold temperatures and are washing up on the beach (Picture: @lara_hand/Twitter)

Texans have been braving freezing temperatures to save almost 5,000 endangered sea turtles from perishing in a winter storm.

A state of emergency has been declared in Texas as a storm has killed at least 23 people, bringing temperatures as low as -18°C and leaving millions without electricity.

The inside of some homes are so cold there are big sections of ice across people’s doorways, floors and ceilings.

Despite the turmoil families are going through, many have taken the time to rescue sea turtles and deliver them to a convention centre where volunteers are trying to keep them alive.

The turtles, which have washed up on the beaches of South Padre Island, off the southern coast of Texas, are cold-stunned.

This means they are exhibiting hypothermic reactions such as lethargy and an inability to move, said executive director of the South Padre Island Convention and Visitors Bureau Ed Caum.

The site is keeping around 4,700 turtles in tubs and enclosures until it is warm enough to release them back into the wild. 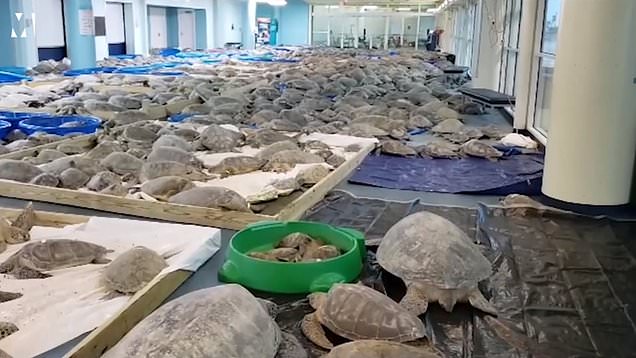 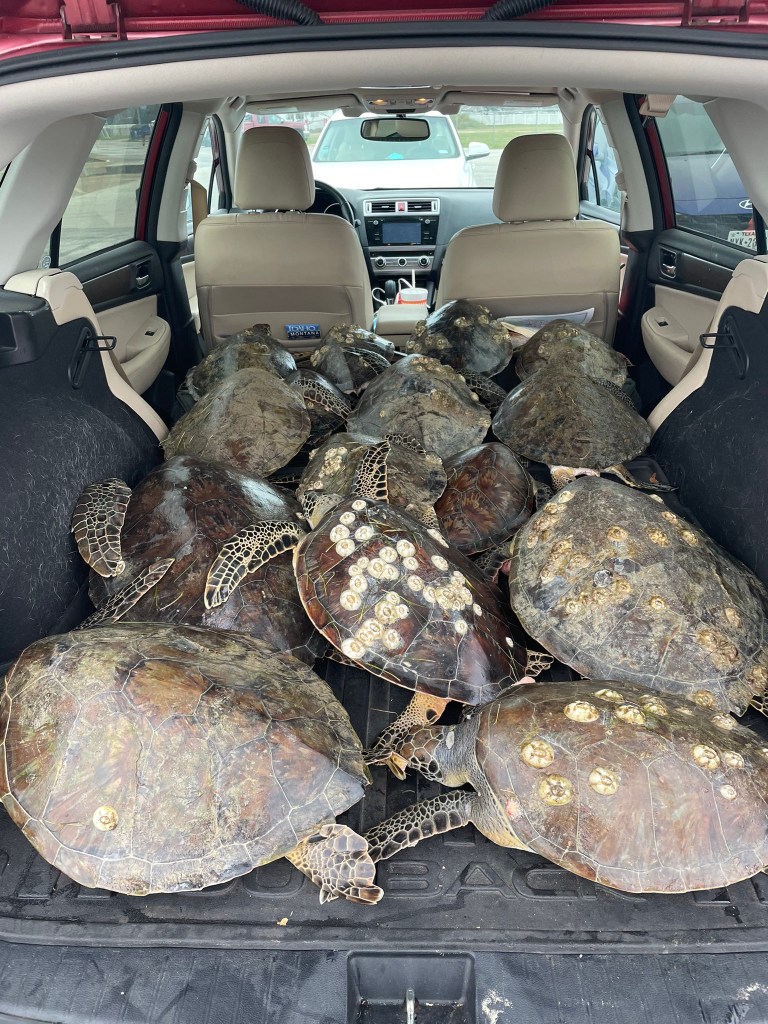 Texans have been pulling up ‘every 15 minutes or less’ with turtles (Picture: @lara_hand/Twitter)

Temperatures were around 4°C yesterday, and conservationists are waiting for them to reach 15°C before returning the turtles into the gulf.

The centre had no power or water until yesterday morning but has since been able to heat the centre up to 15°C so the turtles can get their ‘core temperatures up’.

South Padre Island Convention Centre had to start helping on Monday because rescue organisation Sea Turtle Inc, could no longer handle the number of creatures being dropped off.

‘Every 15 minutes or less, there’s another truck or SUV that pulls up,’ Mr Caum said.

The director added that he is hesitant to use the word ‘rescued’ because ‘we know we’re going to lose some’.

He added: ‘We’re trying to do the best we can to save as many turtles as possible.’

On average, between 100 and 500 turtles wash up on the beaches each winter, but the numbers this year are ‘unprecedented’, said Sea Turtle Inc executive director Wendy Knight.

It comes as a group of monkeys, some lemurs and a 58-year-old chimpanzee froze to death after the storm caused a power cut at an animal sanctuary in San Antonio. 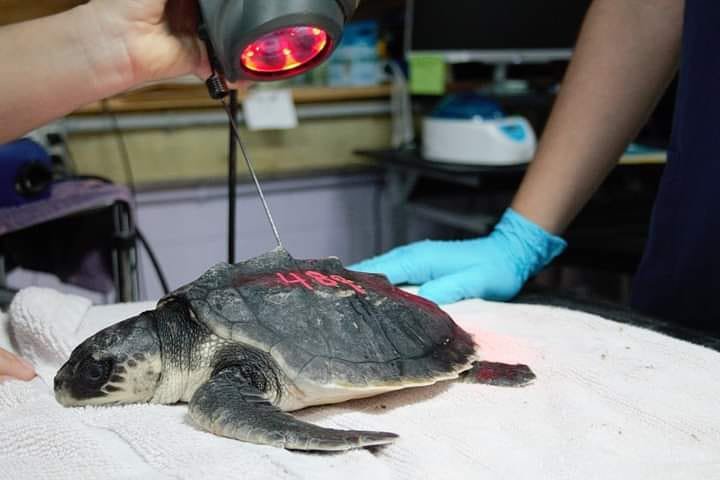 The convention centre is trying to get turtles’ internal temperatures up (Picture: @seaturtleinctx/Instagram) 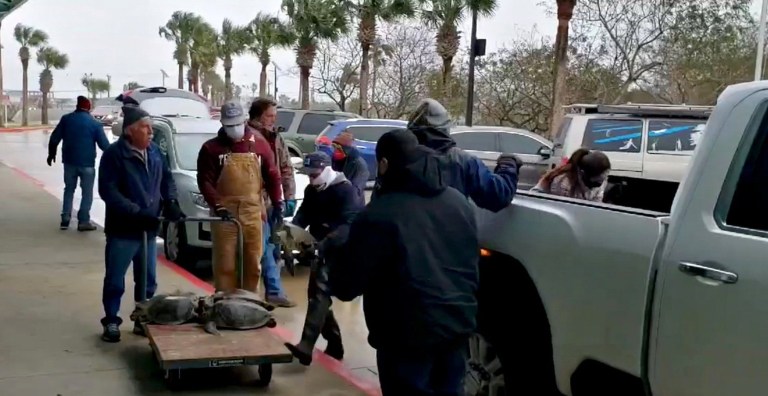 Many Texans do not have power or heating in their homes (Picture: Reuters) 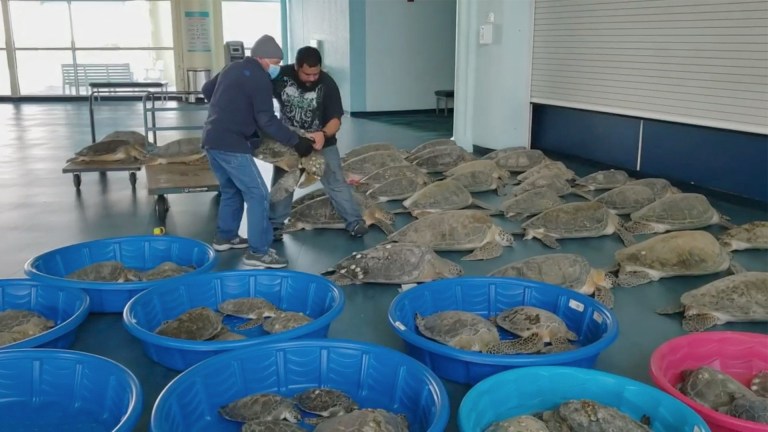 Usually, conservationists have to help between 100 and 500 turtled but this number is ‘unprecedented’ (Picture: Reuters)

Texas is experiencing some of the coldest temperatures it has seen in 30 years.

For the first time ever, all 254 counties in the state have all been placed under a winter storm warning.

This weather is being caused by an ‘arctic outbreak’, triggering a winter snowstorm which started just above the US-Canada border, according to the US National Weather Service (NWS).

Usually Arctic weather stays in the Arctic because of low-pressure systems there but one got through Canada, into the US.