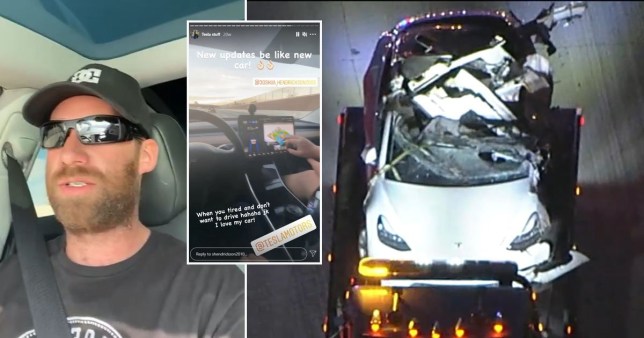 A Tesla driver killed in a crash posted videos of himself online without his hands on the wheel.

Highway authorities in California believe Steven Michael Hendrickson, 35, may have been driving in autopilot ahead of the collision.

The dad-of-two died when his Tesla Model 3 hit an overturned lorry at about 2.30am in Fontana, 50 miles east of Los Angeles.

Another man was seriously injured as he was hit while helping the lorry’s driver out of the wreckage from the previous incident.

One video shared on his Instagram story showed him with a passenger, believed to be his son Joshua, who is playing on the car’s monitor.

Steven Hendrickson appears to be in the driver’s seat without his hands on the wheel or foot on the pedal as the Tesla navigated traffic.

The video included the comment: ‘When you tired and don’t want to drive hahaha jk (just kidding) I love my car!’ 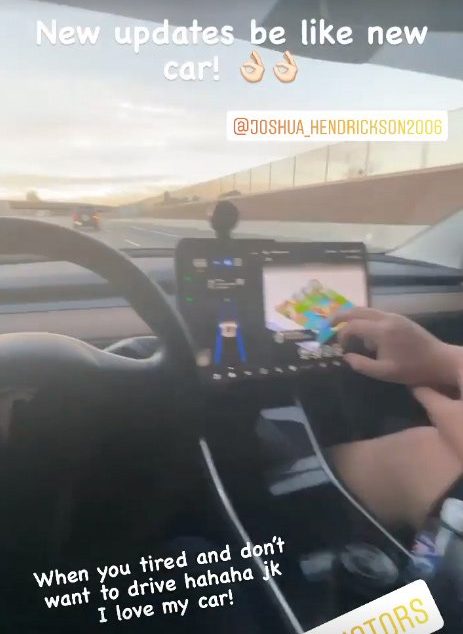 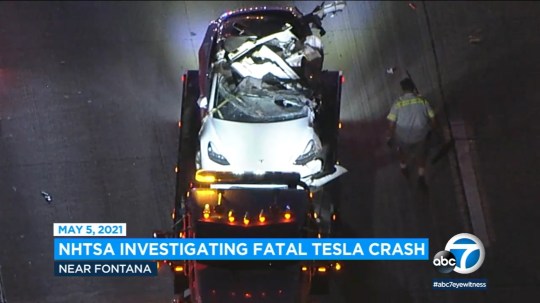 Wreckage of the white Tesla Model 3 is seen in aerial footage on US news channels (Picture: ABC 7)

Another video said: ‘Best carpool buddy possible even takes the borning [sic] traffic for me.’

The videos show he was a member of the Southern California chapter of a Tesla club and regularly drove in the middle of the night.

‘Love coming down the hill before 2.30am with just about no one most days,’ he wrote in another video post.

The collision on May 5 is the 29th case involving a Tesla that the National Highway Traffic Safety Administration has investigated.

In a separate preliminary investigation the California Highway Patrol said it had determined that the Tesla’s partially automated driving system, called Autopilot, ‘was engaged’ prior to the crash.

The ‘high level of interest’ about Tesla led the agency to comment on the Fontana crash, and because it was ‘an opportunity to remind the public that driving is a complex task that requires a driver’s full attention’.

But on Friday the agency said: ‘To clarify, there has not been a final determination made as to what driving mode the Tesla was in or if it was a contributing factor to the crash.’

At least three people have died in previous US crashes involving Autopilot, which can keep a car centred in its lane and a safe distance behind vehicles in front of it.

Tesla is allowing a limited number of owners to test its self-driving system.

The company says in owner’s manuals and on its website that both Autopilot and ‘Full Self-Driving’ are not fully autonomous and that drivers must pay attention and be ready to intervene at any time.