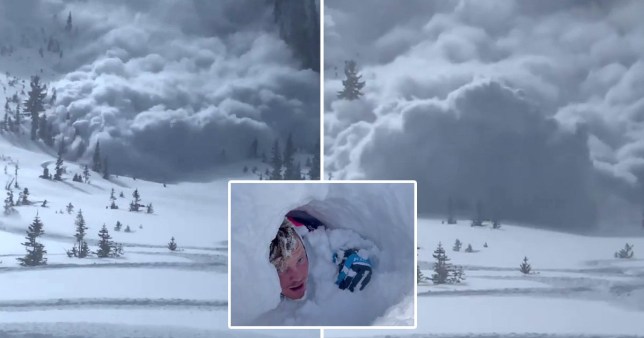 A snowboarder was filming the moment a huge avalanche came into view and started barrelling down the hillside towards him.

The billowing snow was moving too quickly for Nate Carlon to be able to avoid it, and he was quickly buried underneath.

He had been boarding in mountains in eastern Utah in the US with friends, who had snowmobiled to an area of back country on Saturday.

All of them had come prepared with avalanche backpacks, radios and beacons.

However, four out of the six of them were buried by the avalanche. Some were stuck only up to their chests, but one of them was covered completely.

They were thankfully able to dig themselves out.

Nate posted on Instagram: ‘Extremely grateful for the outcome of the events this weekend.

‘While riding up in the Uintas Miles, Hunter, Craig, and I were caught in an avalanche that buried us.

‘We are extremely fortunate that we were all able to walk away without injury and take this as an extreme learning experience.’

Mr Carlon told local news station KSL that his friend Hunter was buried for three minutes before he managed to make an air pocket, and stick his hand up out of the snow to show where he was.

He added: ‘It is a miracle that everyone made it out alive and safe.’

Local police said this weekend: ‘We plead for people to avoid the backcountry where avalanche danger is high. Always check Utah Avalanche Center’s daily updates for #avalanche conditions. And ALWAYS use extreme caution and be prepared with proper equipment before entering the #backcountry.’

On the same day Mr Carlon escaped the avalanche, four skiers were killed in nearby Millcreek Canyon, Four others were airlifted to safety.