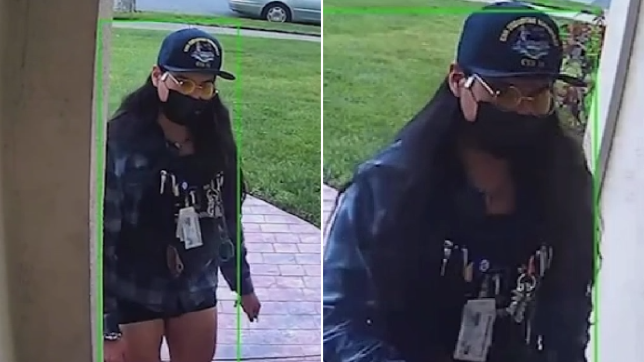 This man was filmed banging on an Asian family’s door and hurling racist abuse at them as their six year-old twins cowered inside (Pictures: ABC7)

A pair of six year-old twin siblings cowered in fear as a racist banged their front door and screamed ‘You brought Covid!’ The disturbing incident saw also Huang Zhu and wife Yin Huang trapped inside their home in San Jose, California, last month as the man they identified as a neighbor hurled racist abuse.

Huang and Yin initially believed the knocking to be a delivery courier, but stayed back from the door when the abuse – which was captured on a doorbell camera – began.

Recalling what one of her children asked, Yin said: ‘He asked me, “Mommy, did I do this because I watch too much iPad and he’s here to punish me?” I didn’t know what to say. I said “You did nothing wrong, we did absolutely nothing wrong.”‘

The neighbor – who has not been named – was previously arrested for elder abuse of his father. He now faces possible hate charges for racially abusing his neighbors.

Huang and Yin shared what happened to them on a neighborhood website, and have been flooded with support by neighbors appalled by their ordeal.

The couple told ABC7 that they are also filing a restraining order against their neighbor in the hopes of preventing a repeat of the incident.

Anti-Asian hate crimes have rocketed across the US in the past year. Much of the abuse has been linked to the Covid pandemic, which is believed to have originated in the Chinese city of Wuhan.

Donald Trump was accused of stoking anti-Asian hatred during his time in office, after repeatedly referring to Covid as ‘the China virus.’

How many people has Joe Goldberg killed in You?