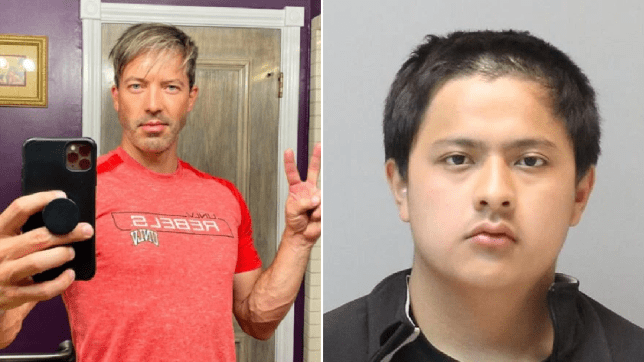 Anthony Guerrero, left, is accused along with his girlfriend of murdering her father Daniel Halseth (Pictures: Facebook/police handout)

A teenage girl and her boyfriend whose parents reportedly forbade them from seeing each other allegedly murdered her father and then attempted to burn his body to cover up the act.

Sierra Halseth, 16, and Anthony Guerrero, 18, were arrested on Tuesday in connection with the killing of her father, Daniel Halseth, 45, Fox 5 reported.

The father was found stabbed and dead in his garage in Las Vegas, Nevada, which had been set ablaze, on Friday night.

Daniel’s mother called police for a welfare check on him because she had not heard from him, according to an arrest warrant. Cops then asked Daniel’s landlord to check on him. The landlord proceeded to find Daniel’s body inside the garage, burned. Officers at the scene said it appeared that a small fire was lit in an attempt to conceal Daniel’s murder.

Simultaneously, Guerrero’s parents arrived at the scene and told officials they were looking for their son, who had dated Daniel’s daughter from around June to December 2020.

Authorities then found out that Daniel had informed Guerrero’s parents that his daughter and their son planned to run away together. Both of the teenagers’ parents then decided that they should be separated.

Police searching the Las Vegas home found a new chain saw, a circular saw and a handsaw ‘with apparent blood and tissue on the saw and in between the groves of the saw’, according to the report. There was blood and a burned section in the living room and the house smelled of a light fluid throughout. Authorities believe the teens attempted to dismember Daniel’s body.

Guerrero was confronted by Utah Transit Authority police officers on a TRAX train station. He was not able to show proof of purchasing a ticket to ride the train, according to the affidavit. Guerrero and Sierra were both arrested on the spot in Salt Lake City and have been extradited to Nevada where they will face charges.