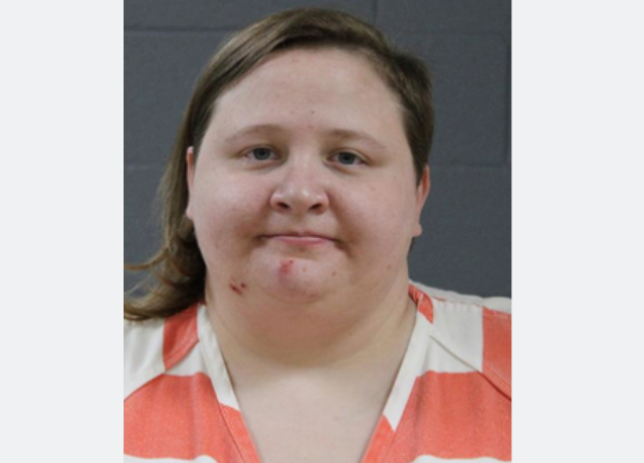 Guyla Savage is accused of showing boys nude photos of her husband, and slapping them on the behind at the residential behavioral facility where she worked (Picture: Washington County Sheriff’s Office)

A worker at a behavioral center for teenagers showed boys photos of her husband naked in lingerie – and slapped the youngsters’ behinds, police say. Guyla Savage, 32, is said to have held up her phone to four teenagers at the Falcon Ridge Ranch Academy in Virgin, Utah, to show them the explicit snaps.

A police affidavit said: ‘They had seen a picture of a male, identified as (Savage’s) husband, dressed in lingerie, with his penis exposed. All four students stated they were looking at (Savage’s) phone while she was holding it and saw the picture.’

Savage, who was arrested on Wednesday, is also accused of striking the same four boys at the residential facility on the backside ‘on numerous occasions.’ Some of those boys said Savage would slap them during ‘horseplay’, while others claimed the strikes were unprovoked.

Those boys said they found it ‘weird’ for a staff member to slap them, and that she would use her hand, foot or a book to do so. Their ages have not been shared.

Washington County Sheriff’s Office arrested Savage after a tip-off about her alleged behavior. She requested a lawyer be present during her interview, and was arrested without answering any questions.

She is being held at the Purgatory Correctional Facility ahead of her next court appearance, KUTV reported.