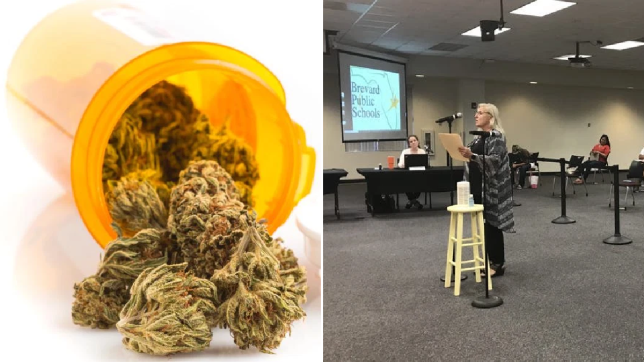 A teacher who was shoved on stairs by a student has been fired because her post-injury drug test revealed she used medical marijuana. Allison Enright said she was unaware that her medication violated the school district’s policy, but that did not save her job.

The teacher at Space Coast Junior/Senior High School in Cocoa, Florida, corrected a student for breaking directional hallway rules meant to minimize contact amid the coronavirus pandemic. The student pushed Enright on a flight of stairs, Florida Today reported, – but that later that wound up being the leaat of her problems.

Enright took a drug test after her injury which found medical marijuana. She admitted she took pills with THC twice a day for a health condition which she previously took opioids for.

The school district’s policy, last updated in 2003, states that teachers are not allowed to use ‘illegal drugs’ and did not reference doctor-prescribed marijuana. Medical marijuana is legal in Florida, but at the federal level remains a narcotic in the same category as heroin, methamphetamines and LSD.

School Board General Counsel Paul Gibbs said the district cannot let teachers use marijuana if it wants to continue receiving federal grants from the US government.

On Tuesday, the Brevard County School Board voted 3-2 to terminate Enright.

Enright told the board: ‘I want to make it clear: I don’t do drugs.’

‘I don’t smoke pot. I don’t get high. … I love teaching. It’s not just what I do, it’s who I am,’ she said. ‘I have been at a loss without my students and colleagues. Space Coast high is my family, and I want to go back. Please, let me go back home.’

Enright will have a board hearing reviewing the decision within 60 days. It was not clear what, if any disciplinary action the student who pushed her faced.