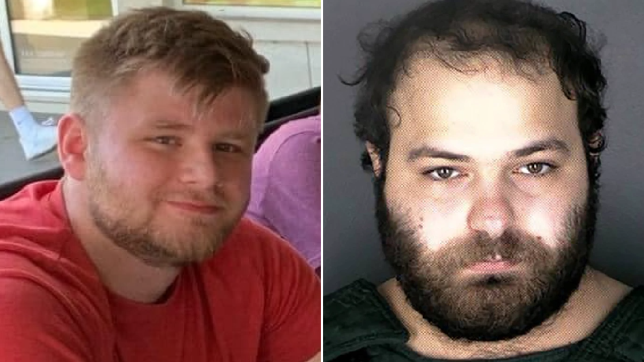 Supplier Nevan Stanisic had just finished a job at the King Soopers supermarket in Boulder, Colorado, on Monday and was leaving when he was shot dead. Ahmad Alissa, right, is accused of murdering 10

A 23 year-old supplier was just seconds away from escaping Monday’s supermarket massacre, but ended up being shot and killed as he walked outside. Neven Stanisic had finished his task at the King Soopers supermarket in Boulder, Colorado, on Monday, and was headed to his next location.

He walked outside towards his car when he was confronted by the gunman – named by police as Ahmad Alissa, 21, – and shot dead. The Reverend Radovan Petrovic, from the St John the Baptist Serbian Orthodox church which Nevin attended, shared the young man’s heartbreaking story with KDVR.

Petrovic said: ‘I was thinking, he missed a few seconds to leave earlier and he’d probably be alive.’ Paying tribute to Nevin, the reverend added: ‘He was a quiet boy. Very well-mannered. Loved his family very much.’ Neven was the second-youngest victim of the massacre, with the other nine people killed aged between 20 and 65.

They included the first cop on the scene, Eric Talley, 51, a father of seven. One of the female victims was at the front of the line for a Covid vaccine, which the supermarket was giving out, when she was gunned down.

Alissa was shot in the leg as he was arrested, but survived, and has now been charged with 10 counts of first-degree murder. He bought the assault weapon used in the killings for $900 six days prior to the attack.

Relatives told police they believed Alissa to be suffering from a mental illness. His brother Ali told the Daily Beast that the alleged killer suffered from paranoid delusions, and believed that people were out to get him.

Alissa was convicted of attacking a schoolmate in class in 2018, leaving the victim bloodied and vomiting. He was sentenced to probation and community service.

Meanwhile, the former high school wrestler’s teammate Angel Hernandez said Alissa ‘was one of those guys with a short fuse.’

Recalling the alleged mass murderer’s sudden rage after once losing a practice match, Hernandez said: ‘Once he gets mad, it’s like something takes over and it’s not him. There is no stopping him at that point.’

Alissa is being held in Boulder County Jail, and is due to make his first court appearance on Thursday.

President Joe Biden has called for a fresh ban on assault weapons in the wake of Monday’s massacre, and last weeks mass-shooting at three Atlanta massage parlors that killed eight.

Biden previously helped shepherd in a 10 year ban on assault weapons while Senator of Delaware in 1994, but then-President George W Bush allowed the ban to lapse in 2004.