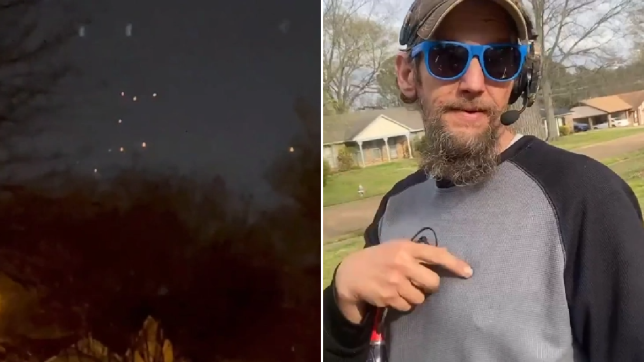 David Howell and his son James, right, filmed 10 dancing lights in the sky above their home, with the pair convinced the lights have an otherworldly origin (Pictures: WREG)

A father and son shared a video of themselves incredulously filming 10 unidentified flying objects that appear to be dancing in the sky over their house. David Howell and his son James spotted the set of lights over their home in Southaven, Mississippi, on Sunday night.

James could be heard exclaiming in wonder at the objects, saying: ‘No kidding y’all. What are these? Those are not planes. They keep coming over the treeline.’ Turning to his father, who could be heard coughing in the background, James added: ‘Dad, they keep coming down here. There comes some more.

‘Wow. Oh my goodness dude. What are these? That is something else.’ David later shared his video and says he believes the objects have an otherworldly origin. He recalled: ‘Everything went through mind. Is this UFOs or aliens?

‘One of them was a lot bigger than than the other nine. They were going north/northwest and they would change positions, you know.’ The Howells live close to Memphis International Airport, and say they were stunned no-one else spotted the lights.

Southaven Police say they did not receive any reports about the lights, with Memphis Airport also declining to comment.

WREG continues to investigate a possible logical explanation for the lights, including whether they might be drones, or decorative lanterns.

David says the experience has turned him into a UFO believer. He explained: ‘I just think the universe is so big why would God only make us? I don’t know but that’s my thought.  I find it hard to believe we are alone.’

How to get a free Creme Egg at Tesco