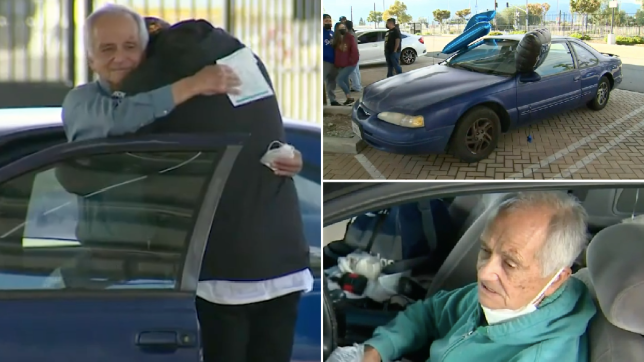 Former teacher Jose Villaruel was living in his car – until a former student saw, and raised $27,000 to help him get back on his feet (Pictures: KCAL)

A group of former students raised $27,000 for their elderly former teacher after discovering he was living in his car. Jose Villaruel, 77, has lived in his 1997 Ford Thunderbird in Los Angeles for the last seven years so he could send money home to his family in Mexico.

The substitute teacher’s work and pay disappeared as Covid hit, leaving him destitute. He explained: ‘I couldn’t possibly support my family and extended family in Mexico and rent an apartment here at the same time with the income that I can have. That’s why.’

Jose lives in fear of his car battery dying, as he uses the Ford’s electronics to power his laptop, which he has been able to use to scrape together some money as an online tutor.

But former student Steven Neva was distressed to see the much-loved teacher, known as Mr V, had fallen on hard times, and vowed to help. Steven said: ‘Like every day I’d go out to work around 5 a.m. and see him going through his trunk, and I just felt the need to do something about it.’

The thoughtful former student created a fundraiser for Jose, in the hopes of raising around $5,000 to help him get back on his feet. But the charity drive was met with a huge response by the retired teacher’s former students, who raised a total of $27,000.

Steven presented a check for the amount to Jose earlier this week, on his former teacher’s 77th birthday. Other students turned up to wish ‘Mr V’ well, and sing happy birthday to him.

And Steven said he hopes his experience encourages others to keep an eye out for their former teachers.

He said: ‘We don’t appreciate these teachers enough. And that’s something that we should be doing.’

Grain store transformed into a stunning home up for sale for £725,000