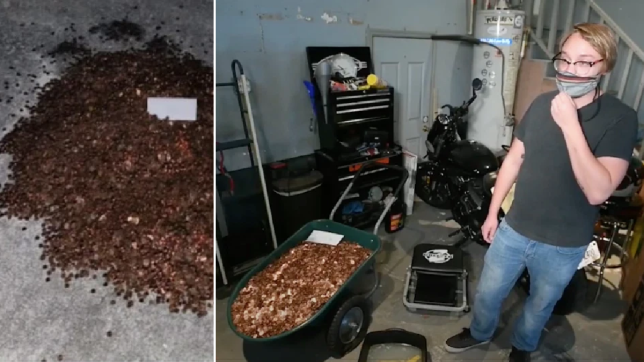 A boss paid his employee’s final $915 paycheck out with tens of thousands of oil-covered pennies dumped in his driveway. Andreas Flaten said he found the mound of pennies in mid-March along with his last paystub and an explicit note.

‘That comes out to be like 504 pounds of pennies,’ Flaten told CBS46. ‘I have nowhere to put ’em. I had no idea what I was going to do, like how do I get money from pennies?’

Flaten worked at A OK Walker Autoworks in Peachtree City, Georgia, for a year and gave his two-week notice in November. He flagged a toxic work environment and high turnover at the company and that the boss, whom he said he knew for eight years, promised his final paycheck in January.

However, Flaten said his boss accused him of damages and that he never got the final payment. So Flaten contacted Georgia’s Department of Labor. 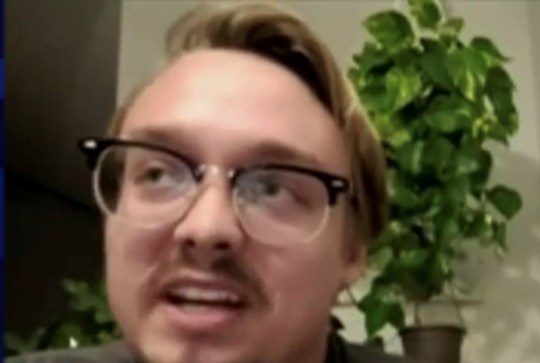 Andreas Flaten said it was ‘a childish thing’ for his boss to pay him in pennies (Picture: CBS46)

As months went by, Flaten said he did not expect his boss to pay him and that he was shocked to find the 90,000 coins.

‘This is a childish thing to do,’ Flaten told the Associated Press.

Flaten has been cleaning the oily substance off the pennies every night to try to exchange them for a more practical form of the money. He said it took him about an hour-and-a-half to wipe off a few hundred pennies.

‘I think that’s going to be a lot of work for money I’ve already worked for,’ Flaten said. ‘It’s definitely not fair at all.’

Flaten’s girlfriend Olivia Oxley, who lives with him, told the AP that she hopes her boyfriend’s strange situation will demonstrate how workers ‘are treated so poorly by their employers.’ She added that they are no longer upset about the petty act and that she was pleased to ‘find a few treasures’ including a penny from 1937.

‘After the first shovel full, all we could do was laugh because this poor miserable man took so much time to be vindictive and cruel,’ Oxley said. ‘We absolutely refused to let him ruin a single moment of ours.’

The shop owner declined to comment to a CBS46 reporter.

Line up announced with Madness, The Streets and Royal Blood plus how to get tickets, prices