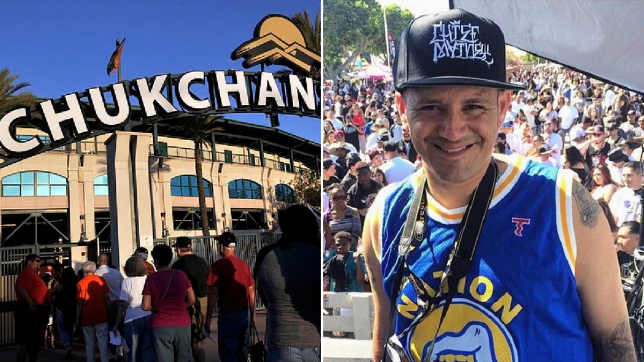 The 18-year-old son of a man who choked to death during a taco eating contest is suing the organizers for negligence. Marshall Hutchings’s lawsuit alleges that his father, Dana Hutchings, 41, wasn’t informed of the risks and danger of participating in a food eating competition.

Dana collapsed a few minutes into the eating contest at Chukchansi Park during a Fresno Grizzlies minor league baseball game in California in August 2019. His mouth was full of chewed and unchewed tacos that obstructed his respiratory system, the lawsuit states according to The Fresno Bee.

Staff at the park immediately began cardiopulmonary resuscitation and used an automated external defibrillator and called 911. By the time that emergency personnel arrived on the scene, Dana was unconscious. The father was transported to Community Regional Medical Center where he was pronounced dead.

Dana died of choking, according to the Fresno County Coroner’s Office. He had not previously participated in an eating contest.

‘But that is not always present in an amateur eating contest’, Taleisnik told the newspaper. ‘The conductors of this event should have made the risks known to the competitors and taken steps to protect them’.

The lawsuit states that Fresno Sports and Event, LLC, which owns the Fresno Grizzlies, ‘failed to fully inform decedent, Dana Hutchings, of every risk he was accepting when he agreed to enter the amateur taco-eating competition’.

Marshall is seeking monetary damages for his father’s death. The amount has not been disclosed.