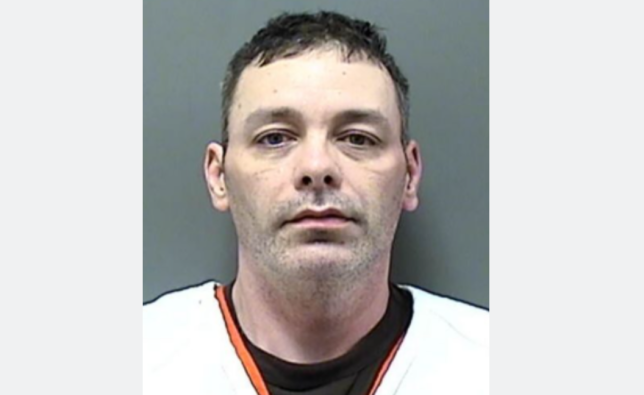 Shane Stanger was branded a ‘sick pervert’ and a ‘creep’ over his alleged rapes of three victims as young as 10 (Picture: Racine County Jail)

A suspected serial rapist was branded a ‘sick pervert creep’ over claims he drugged three victims as young as 10, then raped them 97 times. Shane Stanger, 46, was condemned by Racine County Sheriff Christopher Schmaling at a press conference in Racine, Wisconsin, on Wednesday.

Schmaling said of Stanger’s alleged crimes: The sick pervert needs to be held accountable for what he’s been doing. This is despicable.’ Stanger was busted after one of his alleged victims is said to have found videos of herself being raped stored on his laptop last month.

That victim copied the videos and handed them over to sheriff’s deputies, telling them that she had no recollection of being intimate with Stanger. She said she believed she had been drugged. A search of Stanger’s electronics is said to have turned up numerous other videos of her being assaulted.

There were also videos of attacks on two other victims, one an adult, the other a young child, it is claimed. Investigators are further said to have found videos of victims showering or using the restroom that appear to have been filmed without their permission.

Schmaling’s team have filed more than 200 charges against Stanger, including 87 sexual assault charges, but fears the alleged crimes uncovered so far are ‘just the tip of the iceberg.’

He encouraged anyone else who believes they may have been a victim to come forward.

Hailing the victim whose tip triggered the investigation, Schmaling said: ‘If she is listening today, I want to tell her thank you on behalf of potentially many, many victims.

‘The betterment of that is when we can take a creep like this off the streets and keep him behind bars where he belongs.’

Stanger is being held at Racine County Jail ahead of his next court appearance.