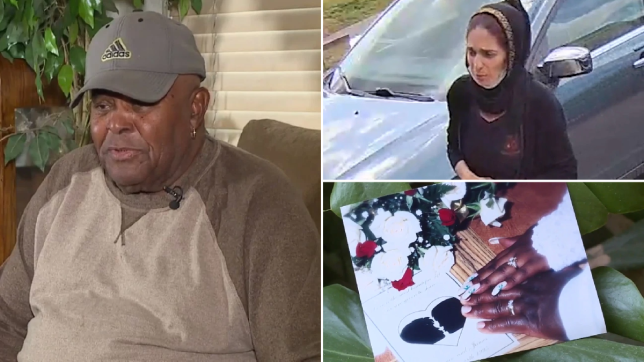 An 89-year-old man had his beloved wedding ring ripped off his finger by a thief who knocked on his door and posed as a saleswoman.

James Sweatt, from Sacramento, California, claims he was mugged on his doorstep on Monday afternoon by a stranger who he says was trying to sell him fake jewelry. But when Sweatt refused, he alleges the woman stole his four-carat, three-diamond wedding ring off his finger.

The victim’s home security camera captured the theft as it happens and footage from the device shows a woman – wearing a black cardigan with a black hood and wearing a black and white skirt – approach Sweatt’s front door at around 2pm.

When he answered, Sweatt says she yanked the ring right off his hand.

Speaking to Fox40, Sweatt said: ‘She twisted and twisted and it was hurting so bad. But she got it off.

‘I looked up and I said, ‘Lady get back out of my yard. Get out of here. I don’t know who you are. You are not who I thought you might have been.

‘She was pretending that she wanted to sell it to me and she was on about, ‘We’re just broke and I need something. Get some gas.’

Within a two-minute window, Sweatt said she walked off with his ring and threw the fake jewelry at him as she left.

Sweatt said he was defenseless against the thief as he relies on help from his family to get around. 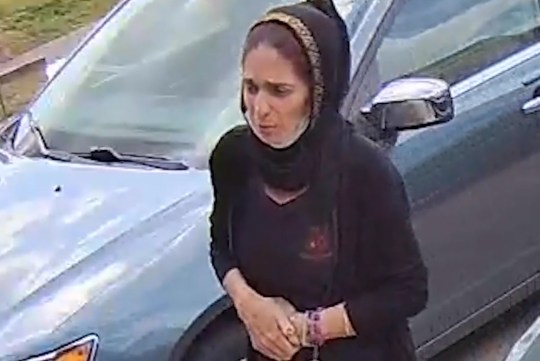 The theft happened when a woman knocked on Sweatt’s door and tried to sell him fake jewelry, he said (Picture: Fox 40) 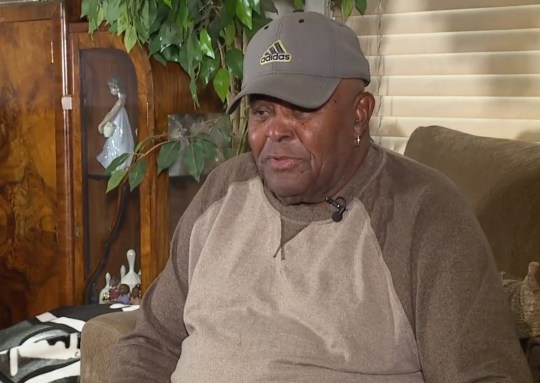 Mr Sweatt has reported the alleged theft to the police (Picture: Fox 40)

He explained: ‘If I had tried to stand up, I would have went down on the deck.’

Sweatt’s son, Jeremy, added: ‘The fact that she had the audacity to steal the ring off of an old man, who can’t even defend himself, it makes me sick to my stomach thinking that.’

Sacramento police have launched an investigation into the opportunistic doorstep theft.