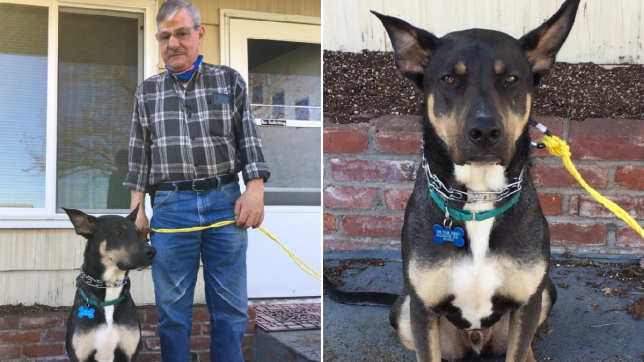 An unwanted shelter puppy called Jack saved the life of his owner Tom Braun, 66, after finally being given the chance to have a loving home (Pictures: KVAL)

A stray puppy who languished unwanted in a shelter has saved the life of an elderly man who finally gave the animal a chance. The 18 month-old dog, named Jack, woke owner Tom Braun, 66, up after noticing Tom had begun choking in his sleep at his home in Eugene, Oregon, earlier this month.

Tom was stunned to wake up and find his t-shirt covered with his own blood, and realized a blood vessel had burst following previous dental work. He recalled: ‘I kind of had this dream like I was choking, then I felt this nudge on my T-shirt. Then he started barking really loud.

‘And I woke up and I had blood all down my mouth and shirt. The bleeding was coming from behind my teeth. A blood vessel had opened up, up there.’ Tom says that had Jack not woken him up, he is convinced he would have choked or bled to death.

Tom was so seriously-ill he spent the next 48 hours in hospital, while next door neighbor Eli Holmes cared for Jack. The life-saving dog had previously been rescued three times from Lucky Paws shelter in Eugene, but was returned each time for being too hyperactive.

But Jack now appears to have found the perfect owner in Tom. He was relaxed and well-behaved while being filmed by KVAL for a story about his heroism on Wednesday.

Tom has sung his pet’s praises, and advised anyone else who is older and lives alone to get their own dog to help keep them safe.

He explained: ‘I’ve had several friends over the years that were awakened by their dog when they’re having a medical emergency. I highly recommend having a dog if you’re my age and live alone.’

Dogs have a proven ability to alert their owners to changes by detecting changes in people’s hormonal activity, and can even be trained to sniff out cancer.

Get in touch with our news team by emailing us at [email protected].For more stories like this, check our news page.