Not another fishy tale — a large, dark fish with a dorsal fin was caught on camera swimming through a flooded street as Hurricane Ian tore through suburban Florida.

The mysterious creature, aptly nicknamed the ‘street shark’ can be see swimming through a flooded Fort Myers backyard in a cellphone video that has racked up over 12 million views on Twitter within a single day.

For years, the Internet has been plagued with false claims of sharks swimming in the street during large-scale floods — but for the first time it may actually be the case.

Local real estate developer Dominic Cameratta braved the Category 4 hurricane to shoot the video from his back patio Wednesday morning after he spotted something ‘flopping around’ in his neighbor’s flooded yard. 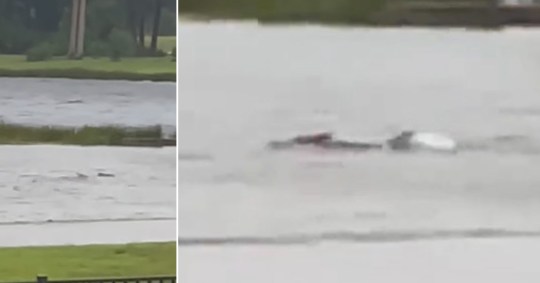 The massive fish was spotted moving through a neighborhood in Fort Myers, Florida

‘I didn’t know what it was — it just looked like a fish or something,’ he told The Associated Press. ‘I zoomed in, and all my friends are like, “It’s a shark, man!”‘

Flooding in Fort Myers, a popular destination along the Gulf coast, right when Cameratta began taking the video. By the time the outlet reached out to authenticate the video, water had risen ‘all the way up’ his house.

Cameratta believes the fish may have made its way from a nearby creek into a retention pond, which then overflowed as floodwaters rose and caused the mysterious creature to spill into his neighbor’s backyard.

Cameratta guessed the fish was about 4 feet in length (1.2 metres). Due to the creature’s length, scientists contacted by the AP say the mystery fish very well could be an actual shark.

George Burgess, the former director of the Florida Museum of Natural History’s shark program, told the AP it ‘appears to be a juvenile shark,’ whereas Dr Neil Hammerschlag, director of the University of Miami’s shark conservation program said it was ‘pretty hard to tell.’

Even without confirmation, many Twitter users reveled in the possibility of there finally being a ‘street shark.’

this is how the world ends. not with a bang but a street shark