Police are looking for a man wearing a gas mask and an orange construction vest, who they believe opened fire in the station (Picture: Armen Armenian)

At least five people were shot during morning rush hour Tuesday at a subway station in Brooklyn, New York, where ‘several undetonated devices’ were found, according to city officials.

A man wearing a gas mask and orange construction vest, similar to what a Metropolitan Transportation Authority worker might wear, was seen throwing a device into the subway station before opening fire, according to law enforcement officials.

Officials found multiple people shot in the station while responding to reports of smoke at the 36th Street station in Sunset Park, a New York City Fire Department spokesperson said. The bloody incident broke out just before 8.30am.

Four of the victims were found at the 36th Street subway station while a fifth was found at the 25th Street station in Greenwood Heights. At least 13 people were injured in total, several by gunfire, fire officials said. 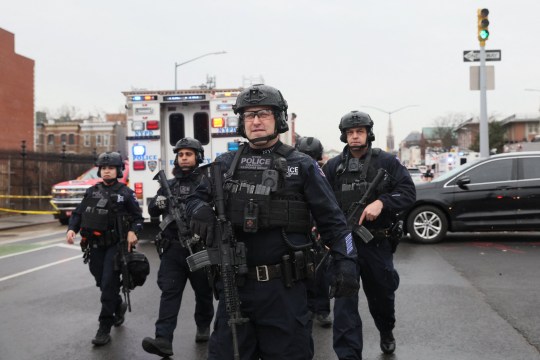 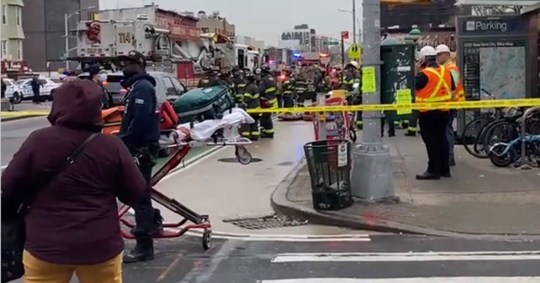 At least five people were injured during a shooting Tuesday morning in Brooklyn, New York

Graphic photos of the incident being shared across social media show blood-stained subway platform floors and injured people being carried away from the station on stretchers.

The NYPD’s bomb squad is on the scene investigating. Officials are searching for as many as four packages they’ve deemed suspicious.

Around 10am police said there were no active explosive devices in the area of the shooting.

In regard to the multiple people shot at the 36th Street subway station in Brooklyn, there are NO active explosive devices at this time. Any witnesses are asked to call @NYPDTips at #800577TIPS. Please stay clear of the area. More provided information when available. pic.twitter.com/8UoiCAXemB

N and R line power is off as police search for the suspect. Trains running on the D, N and R lines would be delayed because of an unspecified investigation, MTA officials said.

New York Governor Kathy Hochul said in a tweet that she’s been briefed on the ‘developing situation’ in Brooklyn, and that her office will work with the MTA and NYPD as the investigation continues.

This is a breaking news story, check back for updates….