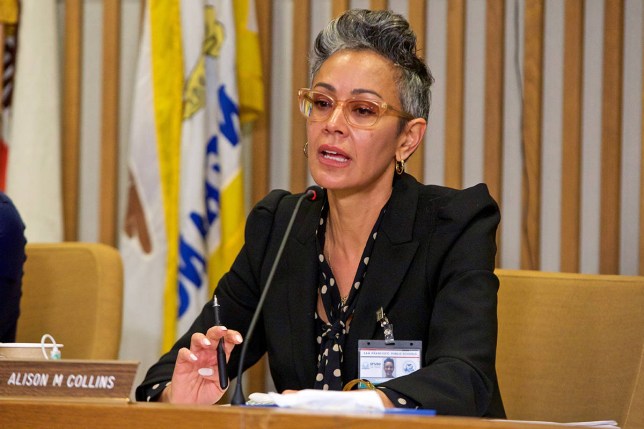 A school board member is facing calls to resign over tweets accusing Asian American students of using ‘white supremacist’ thinking to advance over their black colleagues. San Francisco School Board Vice President Alison Collins’s 2016 tweets were made public by parents who are trying to recall her and two other board members.

Collins, who is black, tweeted that she wanted to ‘combat anti-black racism in the Asian community at my daughters’ mostly Asian (American) school.’

Asian Americans ‘believe they benefit from the “model minority” BS’ and ‘use white supremacist thinking to assimilate and “get ahead,”’ Collins tweeted.

At the end of her thread, Collins said her daughter helped to stop Asian American boys from bullying a Latino student.

‘Don’t Asian Americans know they are on his list as well?’ Collins wrote, referencing racial slurs. ‘Do they think they won’t be deported? profiled? beaten? Being a house n****r is still being a n****r. You’re still considered “the help.”’

Many of the more than 1,000 people who virtually attended a public meeting on Tuesday ripped Collins’ past actions and demanded that she step down, according to the San Francisco Chronicle. San Francisco Mayor London Breed was on their side, stating, ‘our students and our API community deserve better.’

Two school board members who are Asian American or Pacific Islanders, Jenny Lam and Faauuga Moliga, are also calling on Collins to leave her post. The school board had prided itself for prioritizing racial equality.

During the meeting, Collins offered her ‘sincere and heartfelt apologies.’ She previously issued a statement apologizing for the tweets, which did not convince her critics.

Collins’ tweets resurfaced last week as the US experiences an uptick in violence and attacks against Asian Americans. Six Asian women were among eight people killed in a series of mass shootings at three spas in the Atlanta area.

The Ship Stuck in the Suez Canal Is Glorious