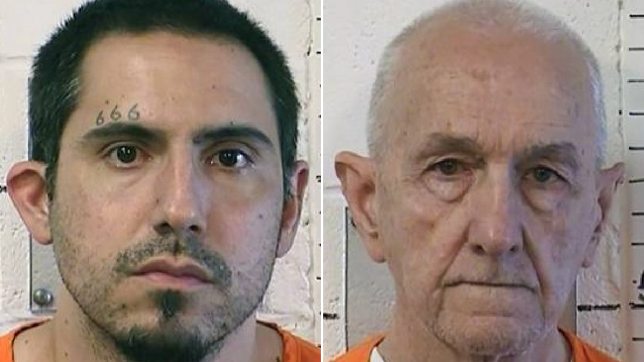 Jason Budrow, left, won’t be executed if he is convicted of strangling infamous I-5 Strangler Roger Kibbe, right

A Satanist will not face execution for allegedly strangling a notorious serial killer who himself strangled his victims to death. Jason Budrow could be jailed for life without parole over the February murder of Roger Kibbe in their shared cell in Sacramento, California, but will not face the death penalty.

Prosecutor Todd Riebe revealed the possible punishment after announcing plans to charge Budrow, 40, with first-degree murder over 81 year-old Kibbe’s killing. Kibbe strangled at least seven young women in the Sacramento area between 1977 and 1987.

Many of his victims were hitchhikers or vulnerable women he abducted and then dumped close to the I-5 interstate, which led to his nickname. He was convicted of the 1987 murder of 17 year-old Darcine Frankenpohl in 1991.

In 2009, developments in DNA evidence saw Kibbe charged with killing six other women aged between 19 and 29.

He admitted those killings, and was serving life without parole when he was himself murdered. Budrow is said to have written a letter to The Mercury News newspaper in March, claiming he’d originally plotted to kill Kibbe to get a cell to himself – but that he’d later decided he also wanted to act as a vigilante.

The convicted sex killer and Satanist, who has a ‘666’ tattoo above his right eyebrow, wrote: ‘My actions were drafted out with specific intent, cognitive complexity, and were generally more nefarious than a haphazard murder-spat.’

Budrow, who murdered his girlfriend in 2010 added: ‘What had started out as my original bare-bones plan of doing a straightforward homicide of a cellmate to obtain my single-cell status evolved into a mission for avenging that youngest girl and all of Roger Kibbe’s other victims.’

California has the death penalty on its statute books, although the liberal state has not executed a prisoner since 2006. Governor Gavin Newsom ordered a halt on capital punishment after he was elected in 2018.

“He was so authentic and candid”