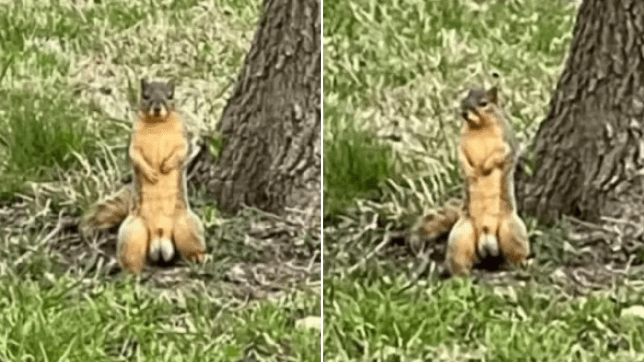 Sarah Lenzenhuber spotted a squirrel that was well-endowed (Pictures: Facebook)

A woman was walking her dog outside her apartment when she stopped in her tracks at the sight of a muscular-looking squirrel with some big nuts.

The squirrel had a large nut sack, to be clear. Sarah Lenzenhuber couldn’t help but take a picture of the well-endowed creature.

‘I saw him while out walking my dog, did a double-take and then doubled over laughing’, said Sarah, who lives in Missouri. ‘I wasn’t sure if I should post it anywhere but then my grade school sense of humor got the best of me’.

In the photos, the squirrel stood upright on its hind legs, exposing its chest and private parts.

Sarah decided to post the photo on Facebook and it was a hit, garnering more than 4,000 likes and 800 comments.

Social media users complimented the squirrel for being gifted in some parts.

‘His nuts are bigger than my partner’s’, one Facebook user wrote.

Another person commented: ‘Wow, he’s got quite the stockpile of nuts for the winter’.

Yet another user said, ‘Is it sad I’m jealous?’

But that wasn’t the only physical feature that many humans admired.

‘Dude, not only is he endowed, he’s ripped’, another user wrote. ‘Look at those pecs’.

Other users commented, ‘Wow, those abs!’ and, ‘Does he have a six-pack too?’

The squirrel that Sarah ran into indeed had a larger nut sack than his average colleague. Male squirrels typically have a scrotum that is 20% of the length of their body not including the tail, according to National Geographic.