Richmond’s Confederate statues are gone. What should replace them? | Virginia

All but one plinth is now bare on Monument Avenue in Richmond, Virginia.

Where once stood enormous statues glorifying Confederate leaders, on a thoroughfare that memorialized a white supremacist past in the former capital of the Confederacy, there is now empty space. The only monument that remains is of a black man: the Richmond native and renowned tennis player and activist Arthur Ashe.

Now, Richmond is poised to determine what will join Ashe’s statue on the avenue’s malls: another symbolic step toward reconciling the city’s ties with slavery and the Lost Cause of the US civil war.

Decades-long demands from activists to remove each homage in bronze to Confederates reached their greatest furor at the height of the Black Lives Matter protests in the summer of 2020. Graffiti, light projections, signs and memorials to black and brown lives lost to police violence transmuted the former Robert E Lee monument into a symbol of protest.

The grassy circle where Lee once stood was informally renamed to honor Marcus David Peters, a black high school teacher fatally shot by police in 2018 during a mental health crisis. And a grieving community expressed its pain with memorials denouncing police violence, with street art, black ballerinas, small libraries and a community garden.

On a street in an elite, white neighborhood where many black people had felt unwelcome in the presence of the statues, interracial and intergenerational gatherings and peaceful protests shifted the atmosphere – until state leaders erected a fence around the site at the beginning of 2021, says the Richmond muralist Austin “Auz” Miles, who frequented the space.

“It just became an activated space … with a community-like, homecoming feel,” she says. “It felt all of a sudden like a safe space … where people were coming in and out and doing things, and displaying their art. I felt sad when they put the gates up and no one could continue to beautify it.”

The likeness of the tennis star and civil rights activist Arthur Ashe is the only statue remaining on Monument Avenue. Photograph: Steve Helber/AP

Governor Ralph Northam’s office says the fence, which remains, was erected so the state could expeditiously remove Lee, pending the resolution of a legal battle that lasted for more than a year, with a group of Monument Avenue residents who aimed to protect the statue. Their lawsuit had cited fears of diminished property values and loss of tax credits on their homes.

But on 8 September, the Lee monument – its reimagining declared the most influential piece of protest art since the second world war by the New York Times – was the last Confederate statue on the street to come down. Several of the roadway’s monuments had been removed in 2020 under emergency powers by Richmond’s mayor, Levar Stoney, and angry crowds toppled a statue of Jefferson Davis, former president of the Confederate states.

But the removal of the statues is not an ending. Now comes a new beginning and the debate on public memory and how that is expressed by a city’s public art.

The Virginia Museum of Fine Arts, one of the largest museums in the US for exhibition space, has been tapped by the state to lead work to redefine Monument Avenue, in collaboration with the city and other partners.

Richmond residents, state and local politicians, artists, activists and historians have varying visions for Monument Avenue. Public art is widely viewed as a tool to tell a more complete and honest narrative of Richmond’s struggles with equality. And how the city decides to uplift people and places with public art has the potential to be a nationwide model, or a litany of pitfalls to avoid, and it’s imperative that Richmond get it right, says activist, community organizer and social worker Chelsea Higgs Wise. 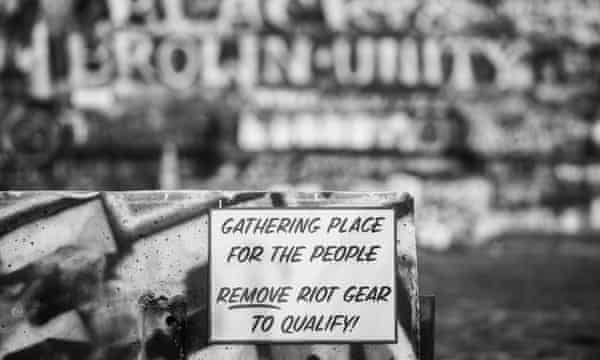 The area around the Robert E Lee statue in August 2020, at the height of racial justice protests. Photograph: Chris Tuite/ImageSpace/Rex/Shutterstock

“A quarter of black people in the United States have roots from Richmond, Virginia, due to the domestic trade of enslaved Africans that took place here. So … what we are going through with telling our story is very much telling a national story,” Higgs Wise says. “And if we have yet to reckon with our history – and have yet to see that the removal of a large monument does not a reconciliation process make – then how are we supposed to model what it looks like for the rest of the south and the country?”

Richmond has earned failing marks on its art projects in the past. The placement of a statue of Arthur Ashe on Monument Avenue in 1996, the likeness of a black man alongside that of Confederates, was widely regarded as tone deaf. Ashe himself is deservedly revered, Richmonders say, but the design of the statue (which depicts Ashe raising a tennis racket and books above children) and its scale compared with others on the street, is questionable, adds Higgs Wise.

“Upon first look, unfortunately you’re unsure if he’s raising his tennis racket to be excited or if he’s going to bring it down on the children that are below him,” she says.

“There’s a lot of older people on [the public art commission] … and they’re mostly coming from the fine art world,” he says. “And then there’s this extra layer of red tape with doing projects in the city.”

But Richmond has done better recently. This week the Dr Martin Luther King Memorial Commission unveiled the Emancipation and Freedom Monument in a popular James River park, a short stroll from the American Civil War Museum. 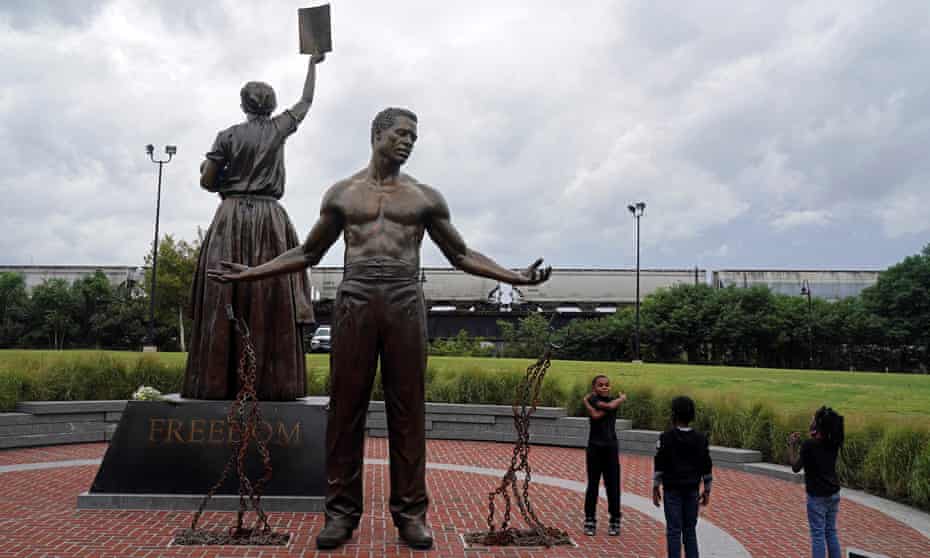 Children play near the Emancipation and Freedom Monument, designed by Thomas Jay Warren, on the day it was unveiled in Richmond, Virginia, on 22 September. Photograph: Jay Paul/Reuters

The 12ft work depicts a man and woman recently freed from bondage, and honors notable black Virginians on its base. In 2017, a sculpture celebrating the Richmond native and nationally recognized businesswoman and civic leader Maggie L Walker was placed on Broad Street, Richmond’s largest thoroughfare.

Successful works of public art, especially monuments and memorials, often depend on community involvement in planning. Artists and architects should “see themselves as resources, facilitators and collaborators”, instead of imposing their visions on communities, wrote the national urban planning experts Cynthia Nikitin and Fred Kent.

They added that widely used public art spaces often emphasize “flexibility, changeability [and] evolution”, seemingly speaking to the organic acts of reclamation that sprang up around the Lee monument. Poor examples of public art are “static sculpture gardens” as opposed to “multi-use public destinations”, they continued.

The VMFA has been praised as an obvious choice to lead artistic efforts on Monument Avenue, and the institution has stressed that it will involve community leaders, city residents, urban planners, historians and archivists.

The VMFA also has the credibility of celebrating black legacy with artist Kenhinde Wiley’s Rumors of War and its exhibitions. Though Northam had asked for more than $10m to be granted to the VMFA for planning and initial construction on Monument Avenue, lawmakers reduced the amount to $1m over two years, and say they will return to the discussion when the museum presents a plan next September.

But Allan-Charles Chipman, who ran for Richmond city council in 2020, and others say they fear that as a large institution, the VMFA won’t be able to evoke the communal, multi-use and grassroots energy on Monument Avenue in 2020. And the museum should keep in mind that the graffiti on the plinths and other pieces were legitimate art, Chipman adds. 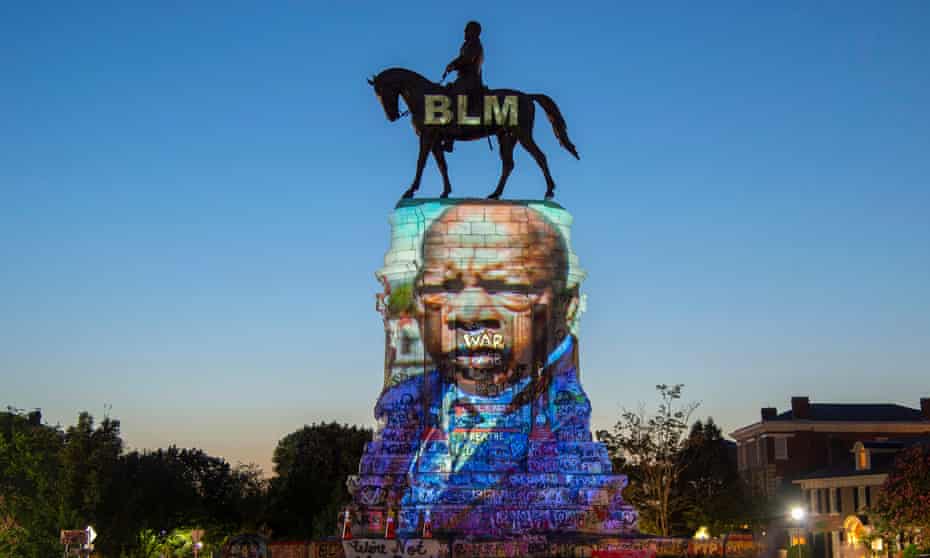 The image of the late congressman John Lewis is projected on the statue of the Confederate general Robert E Lee in Richmond, Virginia, in July 2020. Photograph: Jay Paul/Reuters

“I do not want to erase the reimagining that’s already happened, because this would be a different conversation if the monuments and pedestals were clearly blank slates,” he says. “I would like to see the powers that be get behind, [and] really lead, support and amplify the art and the expressions that have already taken place there.”

The powers that be have already gotten it wrong, says Princess Blanding, the sister of Marcus David Peters, who is running for governor as an independent. Blanding criticizes the Library of Virginia for collecting and temporarily storing the items people left around the monument, just before the statue came down. The library is awaiting instructions from the Virginia department of general services on next steps.

While the institution has been praised for protecting the works, Blanding and others say that the community should have been consulted on the future of these memorials to black lives, and have concerns about how they will be kept and honored.

“While people were celebrating and prepping for this big hurrah, for this symbolic gesture [the Lee removal], they literally had people there collecting these memorials,” Blanding says. “It hurts on a deep level because even though it was named for my brother, that was a space for grieving families.” 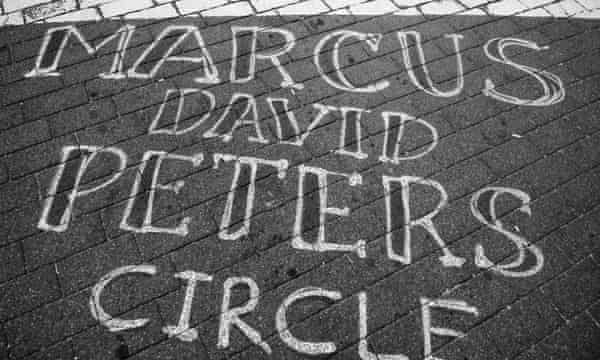 While Mayor Stoney, a black millennial, praised Northam’s multimillion-dollar VMFA proposal as “a massive investment in centering stories of trauma and resilience” others have questioned the validity of funneling public art dollars into an affluent, white neighborhood.

“I would like to see a future for Richmond where we don’t just turn around and build lawn ornaments for a rich, white wealthy elite,” says Alex Criqui, who partnered with fellow activist Dustin Klein on the light projections that cast images of George Floyd and black historical figures on Lee.

Criqui and others have noted that depressed neighborhoods and black historic sites such as the former Lumpkin’s Slave Jail and the city’s African Burial Ground – long neglected by underinvestment – should be the main focus of public art funds. Northam also proposed dedicating $9m toward memorializing the burial ground and jail sites, which are marked by few signs and small memorials, despite a history of national significance.

What is clear is that the world “should hold Virginia to the fire on how we tell our history”, Higgs Wise says. “And how we fund it, to be very honest.”