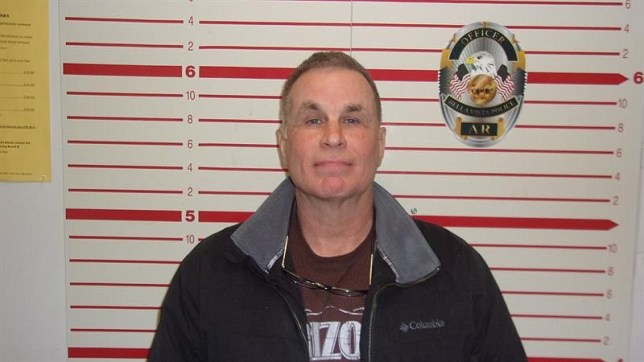 A retiree was jailed for killing his neighbor’s barking dog because he and his wife ‘wanted a lie-in’.

According to police, Mittermeier said he asked Copper’s owner more than once to get the dog to stop barking because he and his wife are retired and wanted to sleep later each morning, but that the noise from the pet was preventing them from doing so.

After Cooper died, Mittermeier claimed a pellet bullet from his air rifle took a ‘ricochet’ and hit the dog while he was shooting in his backyard, a court affidavit said.

The incident took place on August 29, 2019 with police responding to family’s pet dog being shot, reports the Arkansas Democrat Gazette.

During their investigation police found 19 complaints about Copper’s barking, and 18 of the calls came from Mittermeier’s residence, according to the affidavit.

Mittermeier lives across from the family and has a direct line of sight into their backyard from his house, police said.

After the dog had been shot, Mittermeier apparently went to his neighbor’s home and said he wanted to pay for the dog’s medical bills, cops added.

Police obtained a search warrant for Mittermeier’s home and seized pellet guns and pellets. Arkansas State Crime Laboratory testing determined a pellet fired from one of the guns matched the pellet recovered from Copper’s body, according to the affidavit.

Mittermeier was arrested in November 2019 and was sentenced five days in the Benton County Jail on Wednesday.

He has been ordered to turn himself in to begin his five-day sentence at the county jail. He also must serve 23 days of house arrest and wear an ankle monitor.

Mittermeier must also pay $1,622 in restitution and be assessed at Ozark Guidance or a similar facility for any mental health issues. He has been ordered not to have any contact with the neighbor family, their residence or any domesticated animals for a year. He has also been banned from having a gun for a year.

Speaking on behalf of the victims, Brynna Barnica, deputy prosecutor, said Copper’s death wasn’t easy because he suffered the entire day before he was found bleeding under a deck of the family’s home.

She added: ‘It definitely felt like they lost a family member that day.’