A TV reporter in Florida has been hailed as a hero after footage emerged of him rescuing a nurse whose car had been stuck in floodwater.

Tony Atkins’ team was in Orlando filming live coverage of Hurricane Ian, which has caused devastating flooding in parts of the state, when they spotted the woman.

She’d been attempting to drive to work on Thursday when her car got caught in water so high it began to creep up past the bonnet and caused the engine to fail.

The broadcast shows Mr Atkins, of local NBC-affiliated broadcaster WESH 2, wading into the water, which was now reaching up to his waist, and trudging over to the car.

It’s thought the water pressure made the doors too difficult to open, forcing the nurse to climb out of the driver window and onto the reporter’s back before he carried her to safety – along with handbag.

Asked why he had potentially risked his life to save the woman, Mr Atkins simply said, ‘I just had to.’

The hurricane, which made landfall as a Category 4 storm on Wednesday and is now Category 1, has wreaked havoc with 120mph winds and flooding up to seven feet deep in places, forcing hundreds of thousands of people to evacuate.

It has since emerged that the nurse had decided to brave the dangerous conditions because she feared she would lose her job. 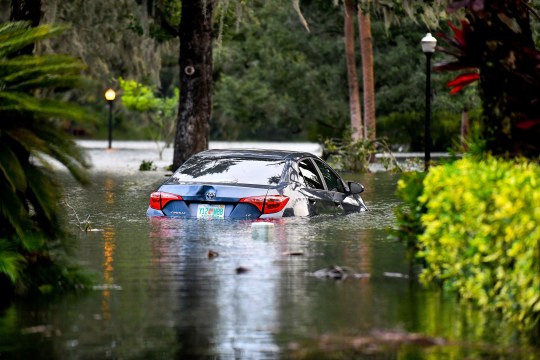 Flooding of up to seven feet deep has left Orlando’s roads in perilous conditon (Picture: Getty) 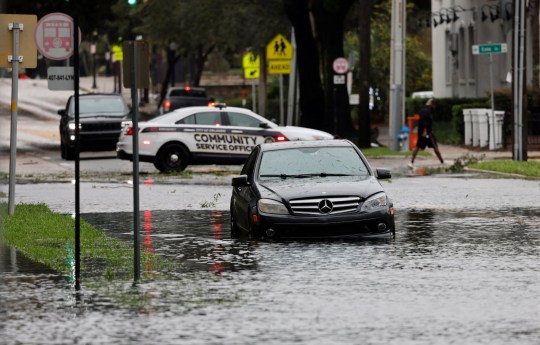 Florida’s death toll stands at 17 but is expected to rise (Picture: Reuters) 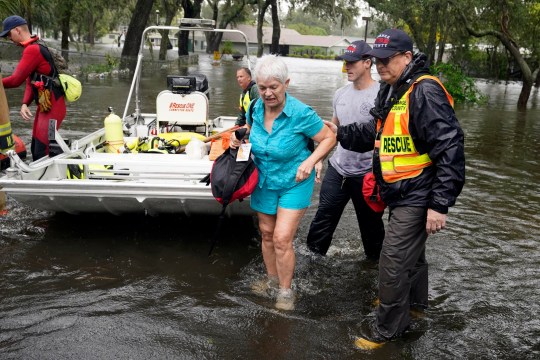 Hundreds of thousands of people were told to evacuate their homes (Picture: AP)

In an update later on Thursday, Mr Atkins said: ‘Our woman from early this morning made it to work.

‘Her job as a nurse hung in the balance, according to her daughter. So glad things worked out.’

He shared a message from the daughter saying: ‘We are so grateful for you! A true hero.’

In a Facebook post, she said her mum was an ‘essential worker trying to get to work or else she would be terminated’.

She wrote: ‘I have so many emotions right now but the main one is gratefulness. 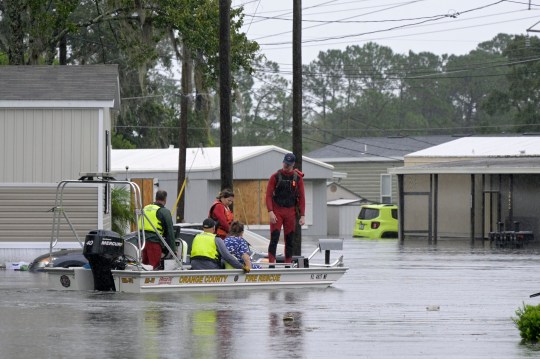 ‘Grateful to God, grateful the news [team] was right there, grateful she was able to get out that window, grateful for Tony Atkin.

‘And she’s at work right now, WORKING. No car… Jesus.’

Fellow reporter Marlei Martinez tweeted: ‘My colleague, Tony Atkins, just did this! Incredible. I also love how he carried her purse the whole way too.’

Locals responded by praising Mr Atkins’ bravery but also calling for investigations into why the nurse felt her job was at risk if she stayed home during what Florida’s governor called a ‘major disaster’.

The reporter said he had seen other hospital workers attempting to navigate the floodwaters, including an ambulance, and called for better signposting of floodwaters. 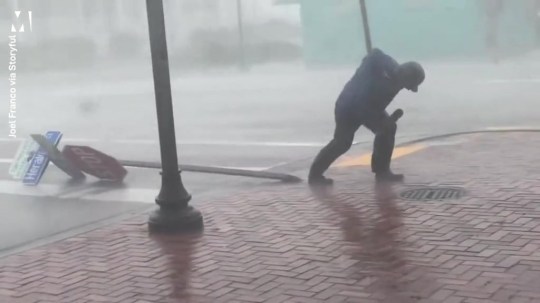 Photos from around Orlando show some deep ponds on roads marked by thin yellow tape put up by officials which is only just visible at dark when drivers reach the edge of the water.

There were no emergency workers in the vicinity who could have helped fetch the nurse, he added, explaining that he ‘used caution’ and acted ‘slowly’ during the rescue.

A total of 17 people are confirmed to have died in extensive flooding across cities in Florida’s centre and southwest, while 700 people have been rescued from life-threatening situations, according to Governor Ron DeSantis.

Nearly 3 million properties in the state were still without power on Friday morning.

Lee County has placed all of its 400,000 residents under curfew in response to a number of ‘looting and violence’ incidents in the aftermath of Hurricane Ian, which is expected to hit the state of Georgia on Friday.