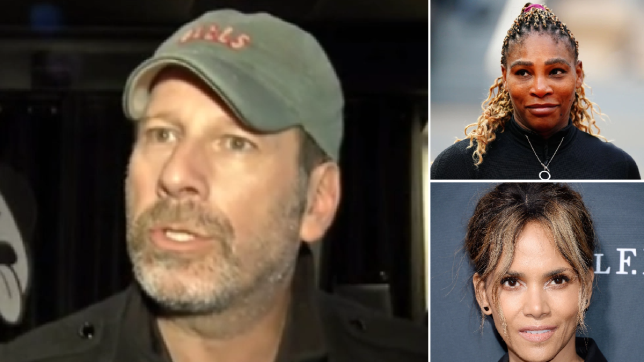 DJ Rob Lederman was fired for comparing black women’s skin to burnt toast live on air, and saying Serena Williams was too dark for him, but that he found Halle Berry attractive

A radio show host has been fired after he compared black women’s skin to burnt toast live on-air, and claimed he would ‘never go to a Serena Williams level.’

Rob Lederman was axed from his job hosting 97 Rock’s Morning Bull show in Buffalo, New York, over Wednesday morning’s conversation, which outraged listeners and anti-racism campaigners. He said: ‘I may get into trouble for this.

‘I have them (toaster settings) to the attractiveness of women that I find to be attractive.

‘I will never go to a Serena Williams level, but I’m very comfortable with a Halle Berry level.’ Lederman went on to say that he needed ‘a little bit of mulatta’ – a word used to describe mixed race women now considered dated and offensive – ‘coming through.’

Didnât hear this live but internet keeps receipts. @97RockBuffalo morning hosts compared how they like their toast to black womenâs skin tone. So just in case yâall missed it too, take a listen pic.twitter.com/6nVolu5a23

He was asked by co-host Chris Klein for his thoughts on CBS News anchor Gayle King, who is black, and answered: ‘Gayle King is not even on my toaster level.’

Klein and a second co-host, Rich Gaenzler, were suspended over the incident, which was widely-condemned and some saw advertisers boycott the station as a result.

Gaenzler has also been fired from his job as an arena host by sports company Pegula, who branded the remarks ‘unacceptable’ and ‘inappropriate,’ adding: ‘There is no place for them in our community.’

Lederman has since issued a groveling apology to Buffalo News over the conversation, saying he understood how offensive it was.

He told Buffalo News: ‘I never saw myself as anything close to even thinking a racist thought.

‘It’s just not who I am. So when I heard that, and heard how it sounded, I was like, “Oh, my God, that sounds terrible.” Now, can I take back those words? No. If you listen to them, were they meant to be hurtful? Absolutely not.’