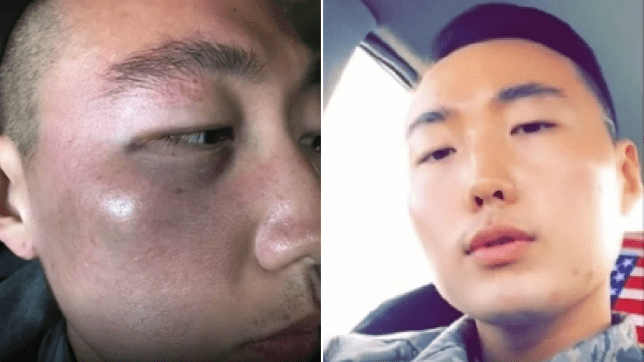 Denny Kim was attacked by racists in Los Angeles last week, amid a spike in hate crimes against Asian-Americans in the wake of the Covid outbreak (Pictures: CBSLA)

A pair of racists screamed ‘Ching Chong…Chinese virus’ at an Asian-American man while beating him up. US Air Force veteran Denny Kim was accosted by the pair while walking through Koreatown in Los Angeles on February 16.

Denny, who was left bruised by the racist beating, said: ‘They were hurling racial insults they were calling me “Ching Chong,” “C***k,” “Chinese virus,”. They told me to go back to China. They struck my forehead, they hit my eye, and I fell down to the ground. They were beating me up.’

Denny was saved by his friend Joseph Cha, who saw the attack unfolding, and rushed over to help his pal. He called police, who took a hate crime report. Denny was only able to offer a basic description of his assailants, who were described as Hispanic, and no arrests have been made in relation to the attack.

Racist attacks against Asian-Americans have rocketed since coronavirus hit US shores, with the incidents rising nine-fold in New York alone in the wake of Covid.

Cops say 24 of the 27 hate crimes recorded against Asian-Americans were linked to Covid, with experts warning the true number is much higher.

Former President Donald Trump was blamed for stoking hatred against Asian-Americans after repeatedly branding Covid the ‘China virus’, and even the ‘kung flu.’

Denny told CBSLA: ‘It’s just absolutely senseless, and it really breaks my heart that people are hurting and targeting the elders.’

Tam Nguyen, from anti-racism group Nailing It For America, added: ‘Watching this violence against Asian Americans is just so upsetting.