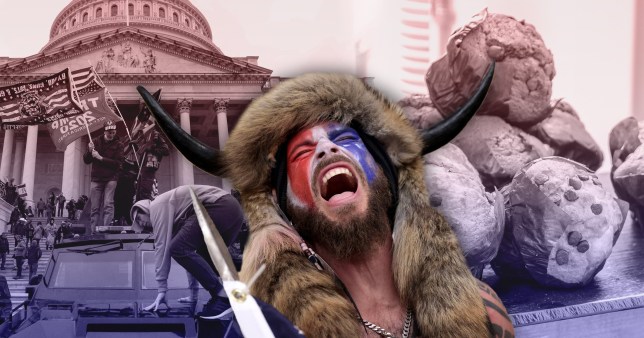 The ‘QAnon Shaman’ who stormed the US Capitol in a fur hat and carrying a spear has defended himself and said he stopped muffins being stolen.

Jacob Chansley went viral due to the unusual outfit he was wearing during the shocking events of January 6 which were watched around the world.

He has been charged with knowingly entering a restricted building, violent entry and disorderly conduct on Capitol grounds and faces up to 20 years in prison if convicted.

Speaking from jail where he is awaiting trial, Chansley said he was there to bring ‘positive vibrations’ to the Senate.

‘My actions were not an attack on this country,’ he told CBS. ‘I sang a song… that’s a part of Shamanism, it was about creating positive vibrations in a sacred chamber.

‘I also stopped people from stealing and vandalising that sacred space. I actually stopped somebody from stealing muffins out of the break room.’

Five people died in the unrest, including a federal police officer and more than 300 people have since been charged with crimes in connection with it.

Chansley, who calls himself Jake Angeli, used to promote himself as a singer and actor but became a figure at right-wing rallies while dressed in his eccentric outfit. 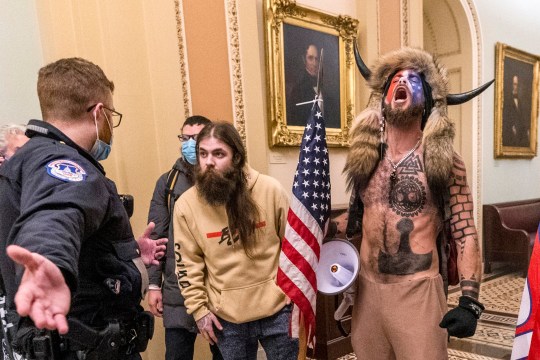 Jacob Chansley, right, and a fellow Trump supporter is confronted by officers inside the Capitol in Washington (Picture: AP)

His apparent resemblance to singer Jay Kay prompted the Jamiroquai frontman to issue a statement making clear that he was nowhere near Washington when the pro-Trump mob stormed the Capitol.

Chansley, 33, describes himself as a ‘digital soldier’ of the far-right QAnon conspiracy theory that claims Donald Trump is waging a secret war against a global liberal cult of Satan-worshipping pedophiles.

He has repeatedly said he was answering Mr Trump’s call to join the riots, and told CBS: ‘I believed that when we were waved in by police officers, that it was acceptable.

Despite his loyalty to the former president, he said he was ‘wounded’ when Mr Trump ignored his calls for a pardon.

‘I developed a lot of sympathy for Donald Trump because it seemed like the media was picking on him. He cares about the American people,’ Chansley said from jail in his hometown of Arizona.

‘That’s also why it wounded me so deeply and disappointed me when I and others didn’t get a pardon.’