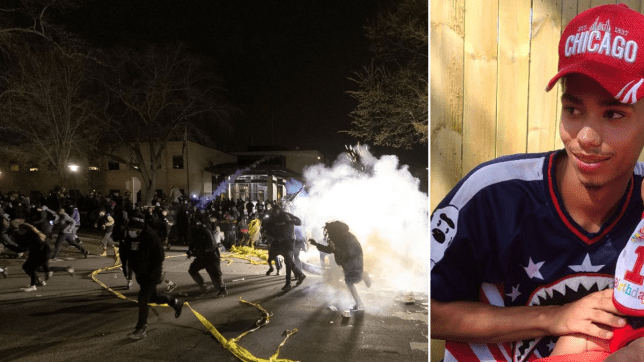 Protests flared up in a Minnesota city on Sunday night into early Monday after a black man was fatally shot while fleeing police about 10 miles from where George Floyd died.

Daunte Wright, 20, identified by his family, was pulled over by police in the city of Brooklyn Center on Sunday afternoon for an outstanding warrant. Cops tried to arrest the man, but he reentered his vehicle and an officer fired at the car, hitting him, according to police. The vehicle traveled several blocks and collided into another car.

Police said the victim’s name would be released by the Hennepin County Medical Examiner’s Office after a preliminary autopsy and notification to the family, but protesters gathered near the scene and wrote ‘Justice for Duante Wright’ with chalk on the street.

Demonstrators held ‘Black Lives Matter’ signs and some jumped on top of police cars and threw rocks at officers, Minnesota Department of Public Safety commissioner John Harrington said during a press conference early Monday. The protest was mostly broken up by 1:15am. 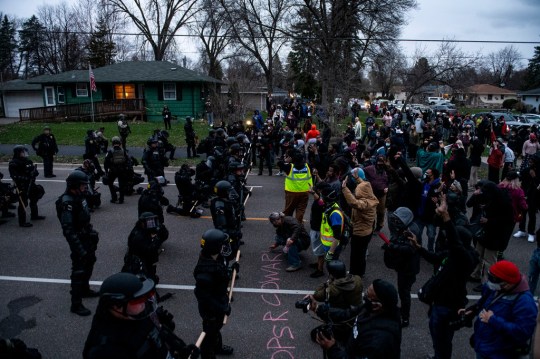 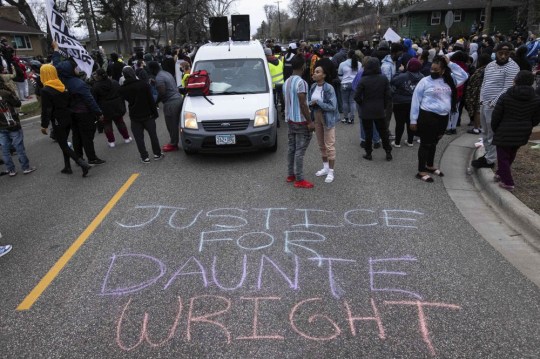 Protesters wrote ‘Justice for Daunte Wright’ with chalk on the streets (Picture: AP)

Brooklyn Center Mayor Mike Elliott imposed a citywide curfew through 6am Monday and tweeted, ‘We want to make sure everyone is safe. Please be safe and please go home’.

Many businesses were looted late Sunday and early Monday in the city with a population of about 30,000 on the northwest border of the state. The National Guard was deployed to Brooklyn Center and around Minneapolis, where former police Officer Derek Chauvin’s murder trial in the death of black man Floyd on Monday enters its third week.

Daunte Wright’s mother, Katie Wright, said her son called him as he was subjected to the traffic stop.

‘All he did was have air fresheners in the car and they told him to get out of the car’, said Katie, adding that she heard someone say, ‘Daunte, don’t run’, before the end of the call.

The mother said her son’s girlfriend who was in the passenger seat called back to say Daunte had been shot. The girlfriend got out of the car covered in blood and was taken to a hospital for non-life-threatening injuries, as was a police officer.