The Republican-backed measure – prohibiting teachers from instructing children aged under 10 in the topics – is now expected to be signed into law by state governor Ron DeSantis.

It comes amid heavy criticism from Democrats, students and LGBT+ campaigners, who held ‘Proud to Be Gay’ protests at the state capitol in Tallahassee.

The bill states: ‘Classroom instruction by school personnel or third parties on sexual orientation or gender identity may not occur in kindergarten through grade three or in a manner that is not age appropriate or developmentally appropriate for students in accordance with state standards.’

Under the legislation, parents would also be able to sue districts if they believe an educator has broken the law.

Florida representative Joe Harding, the bill’s sponsor, claimed coming out as gay had become ‘a trend’ for children.

He had initially pushed for an amendment that would have forced schools to ‘out’ students to their parents, but withdrew it last week.

He and other Republicans argued parents should be broaching the subject of sexuality with their children, rather than schools. 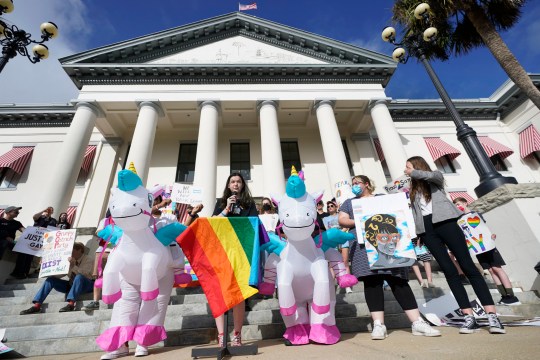 ‘Proud to Be Gay’ protests at the state capitol in Tallahassee attacked the proposal (Picture: AP) 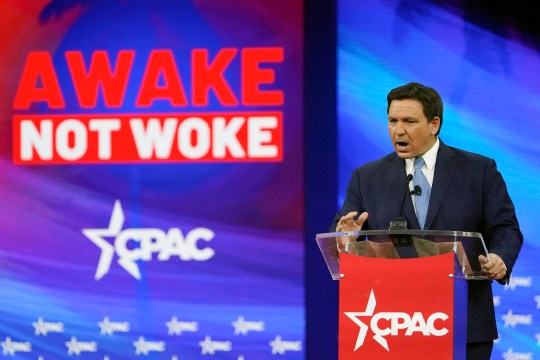 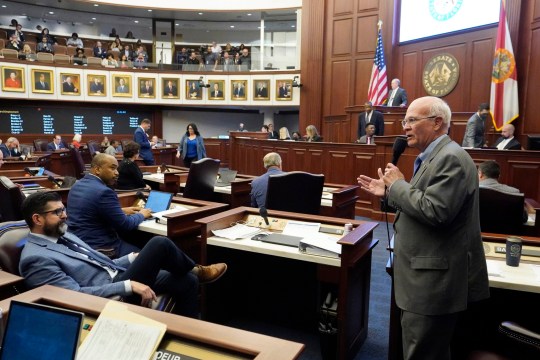 Republicans have argued that parents should be broaching the subject of sexuality with their children, rather than schools (Picture: AP)

Carlos G. Smith, Florida’s first LGBT+ Latino legislator, said the bill ‘sends a terrible message to our youth that there is something wrong with LGBT+ people’.

In a statement after the measure passed, US secretary of education Miguel Cardona said: ‘Leaders in Florida are prioritising hateful bills that hurt some of the students most in need.’

The bill – branded ‘dangerous’ by president Joe Biden – is set to become law on July 1.

Democrats argue it represents an attack on the LGBT+ community, and that it could lead to bullying and even suicides.

At a news conference on Wednesday, White House press secretary Jen Psaki reiterated the president’s support after it emerged he had previously voted for a similar bill while serving in the Senate.

When asked why Mr Biden had previously backed such restrictions, Ms Psaki said: ‘You have seen the president speak passionately about his view that a bill like this, which would discriminate against families, kids and put them in a position where they don’t get the support they need, is discriminatory.

‘It is a form of bullying and it is horrific. The president has spoken about that.

‘In terms of his views and comments from 25 years ago, I think the most important question now is why are Florida leaders deciding against kids who are members of the LGBT+ community.

‘What prompts them to do that? Is it meanness? Is it wanting to make kids have more difficult times in school and their community?’

According to the Public Opinion Research Lab at the University of North Florida, 49% of residents oppose the bill while 40% support it. 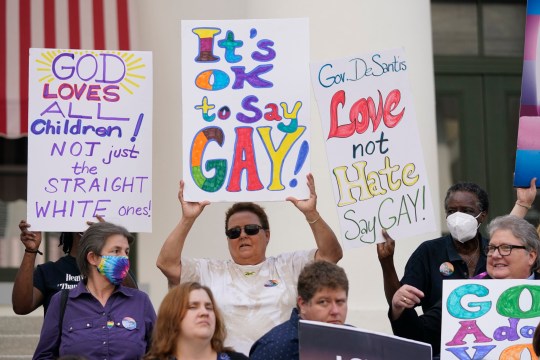 Concerned parents also gathered to speak on the steps of the Florida Historic Capitol Museum in front of the Florida State Capitol on Monday (Picture: AP) 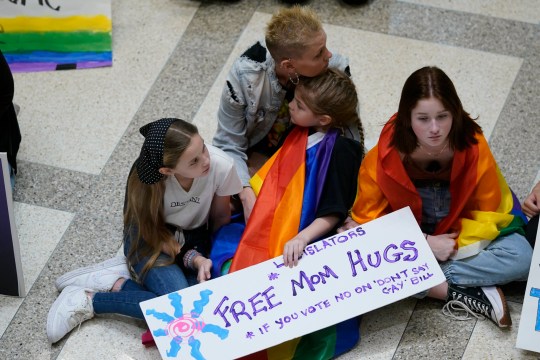 Among Republicans, 44% strongly approve of the legislation, compared to 19% of Democrats.

When the data is broken down in age groups, a majority of recent secondary school graduates aged between 18 and 24 disapprove of efforts to erase LGBT+ people in schools.

Cathryn Oakley, senior counsel at the Human Rights Campaign, insisted Florida state legislature is ‘playing a dangerous political game’ with the health and safety of children.

She said: ‘The existence of LGBT+ people across Florida is not up for debate. We are proud parents, students, and teachers, and LGBT+ people deserve to exist boldly, just like everyone else.

‘Discriminatory pieces of legislation like the “Don’t Say Gay or Trans” bill don’t solve any critical issues in Florida.

‘Instead, these bills shamefully attack and endanger LGBT+ students who are just trying to get a quality education, whom the state has an obligation to treat fairly and protect.’

According to the political lobbying group, more than 290 anti-LGBT+ bills were introduced across 33 states last year, including more than 140 specifically targeting trans people.

The state of Iowa also joined South Dakota last week in banning trans women and girls from participating in sports teams consistent with their gender at schools and colleges.