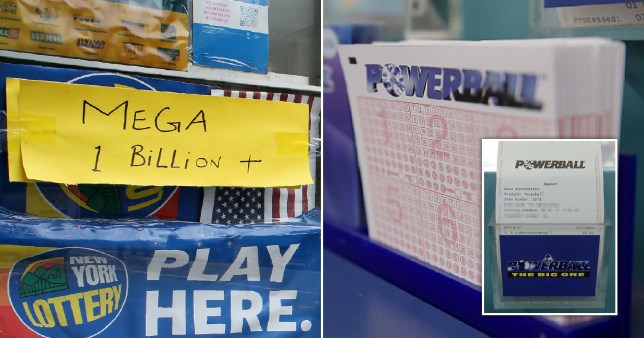 The Powerball jackpot has grown to $1billion, which is the second-highest total in the history of the game (Pictures: Getty Images)

The Powerball lottery has reached $1billion – the second highest amount in the game’s history.

If someone wins the jackpot, it would be the fifth biggest US lottery payout ever, according to the Multi-State Lottery Association, which operates the Powerball.

A winning ticket must match all six numbers in the drawing, which are five white balls and the red Powerball.

Regardless of the number of tickets, the odds of matching all six are roughly one in 292million.

The one-time, upfront cash payment option is less than half the annuitized amount. Pretax, that totals 497.3million.

With a jackpot so large, more people are trying their luck in the lottery. The number of lottery players who are purchasing their tickets online is growing.

Since the current prize run in August, about 15% of ticket sales in New York state were bought using the app Jackpocket, which is available in a dozen other states. And ticket sales are up 54% since mid-October.

‘If you think of like Amazon and Black Friday, these jackpots are kind of our Black Friday’s,’ Jackpocket founder Peter Sullivan told the New York Post.

‘Usually we get one or two every few months, but this one’s exciting since it’s coming off 37 consecutive Powerballs that have not been won.’

The app is also designed to eliminate the issue of players forgetting to check their tickets.

‘You buy your ticket, you see that nobody won and now it’s up to a billion dollars,’ Sullivan said.

‘So you know you didn’t win the jackpot, but a lot of people, turns out, will win 10, 20, 40 bucks. What’s nice about the Jackpocket app is it gives you a push notification that you’ve won.’

Jonathan Ross’ TV pals look incredible as they arrive at his legendary Halloween party – can you spot who’s there?