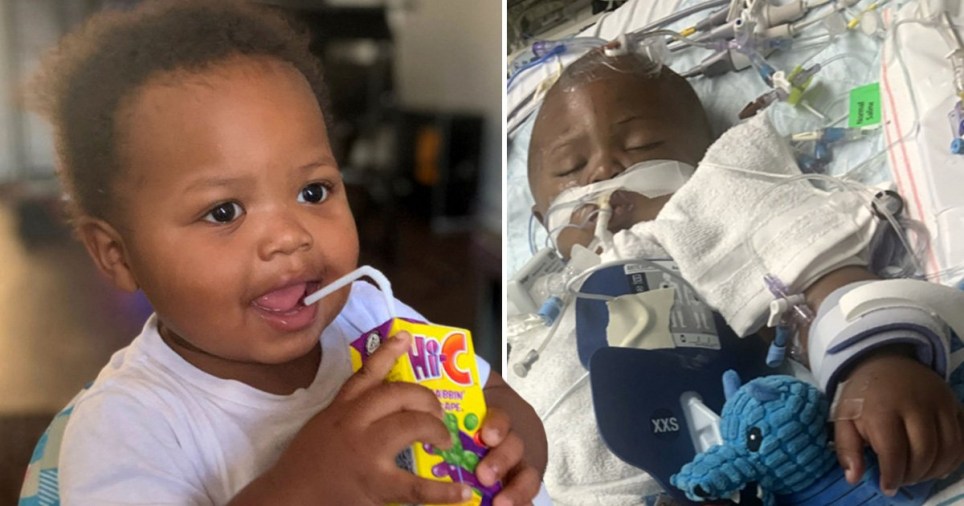 Legend Smalls, aged one, remains in hospital after being shot by a police officer in Houston, Texas (Picture: Benjamin Crump Law)

A one-year-old baby is ‘fighting for his life’ after being shot in the head by police who were chasing a robbery suspect. Legend Smalls has had part of his skull removed to relieve swelling on his brain after being hit by a bullet from a Houston Police officer’s gun by accident.

The youngster was shot at a gas station on March 3 when his mother, Daisha Smalls, said she was sat in her car with her son after filling up with fuel and a suspect on the run from police jumped into their car with them.

That’s when a police officer – thinking the suspect had a gun – fired his weapon, hitting not only the male runaway, but also the one-year-old child in the back seat. The suspect, a man in his 30s, died at the scene and Legend was rushed to hospital and remains in life-threatening condition, the family’s attorney has said.

According to initial reports by Houston Police Department (HPD), the shooting happened around 11.30pm on March 3 at a Chevron gas station near the Southwest Freeway and Beechnut in Houston. 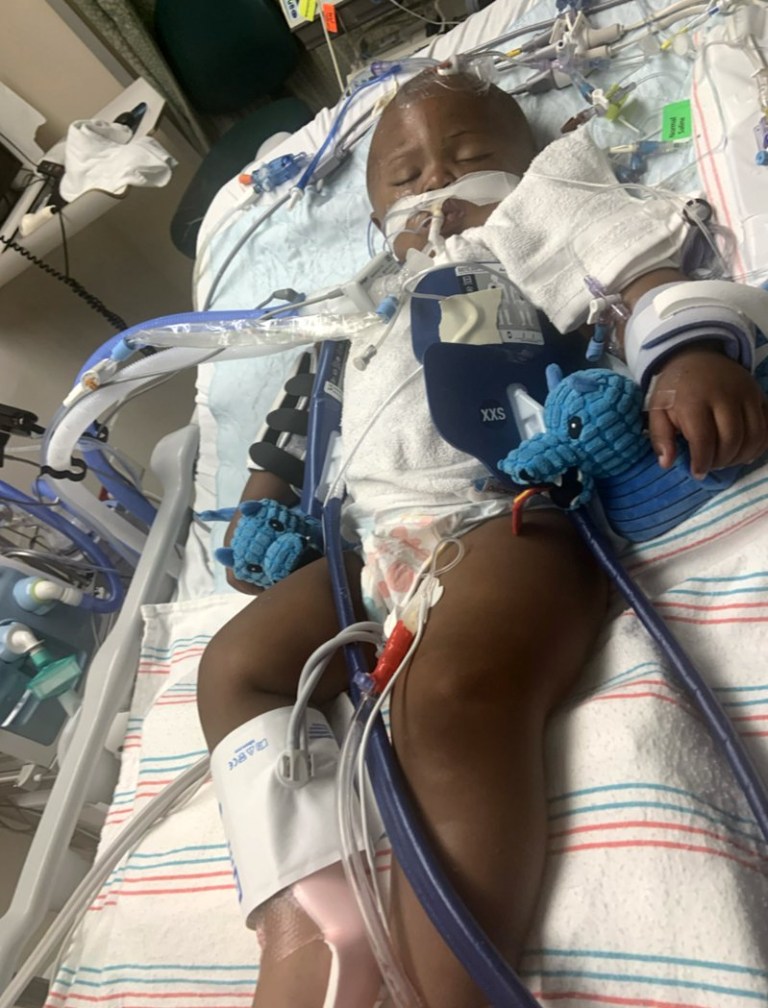 The department said Smalls was parked at pump number four and claims that she was outside her car getting gas, and her baby was in the back seat.

But speaking at a press briefing yesterday, Smalls, 19, said she was in the driver’s seat of her vehicle when the suspect in a black Mercedes crashed at the gas station and made his way over to her, reports ABC 13.

Smalls has recalled how the man jumped inside of the car and sat on top of her, while demanding she hands over her car to him. She said she screamed repeatedly that she wasn’t going to get out because her son was in the back seat.

Houston police said they had been chasing the man for three miles and that his black Mercedes was possibly linked to two aggravated robberies.

The department has said officers thought the suspect was about to steal the woman’s car and that he had a gun. 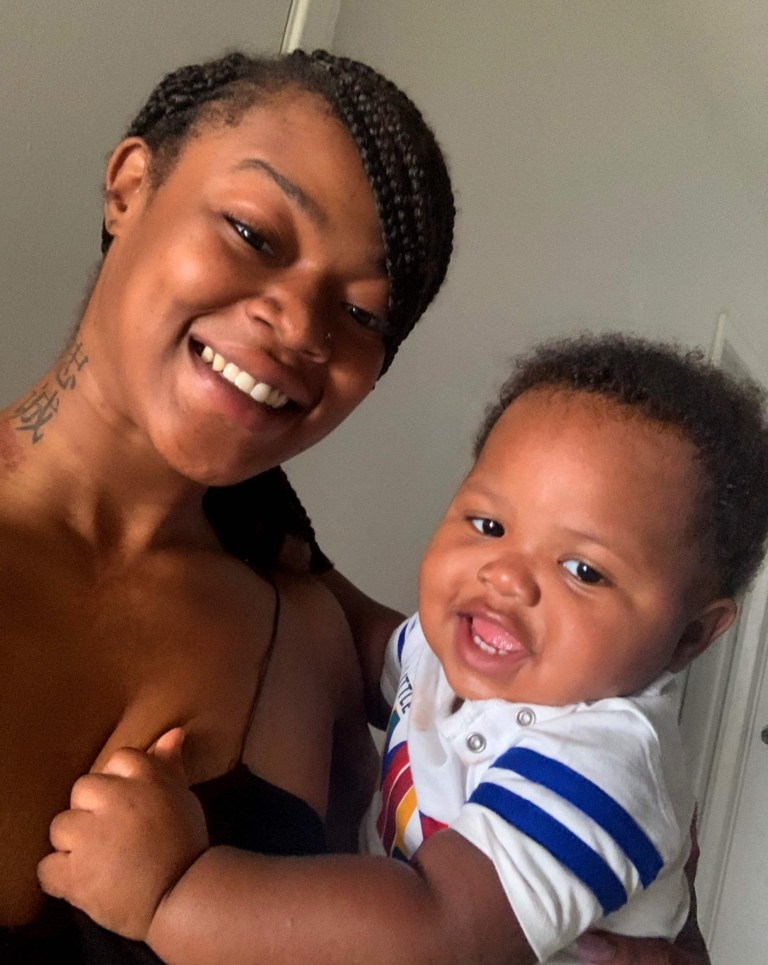 Daisha Smalls and her son, Legends Small, who was shot in the head and seriously wounded by police on March 3 (Picture: Benjamin Crump Law/Getty)

According to police, officers told him to drop his firearm but when he did not, an officer fired his weapon, hitting both the suspect and Legend. Police say the officer who opened fire didn’t know the baby was in the vehicle.

Smalls’ civil rights attorney, Benjamin Crump, said: ‘They knew she was in the car, but they still shot anyway, knowing a Black woman was in the car. Her life matters.

‘What will be his quality of life after having a bullet removed from his brain and having part of his skull removed to release swelling? Little Legend will live for the rest of his life with their consequences.’

Legend, who remains in ICU, has endured more than 10 seizures since partial removal of his skull, Crump added. He also stated that he and the Smalls family hope to try to get body camera footage of the incident released.

Meanwhile the baby’s mother has described her son as very smart and active, and has said Legend is struggling to breathe on his own.

Smalls said: ‘My son has been fighting every day for his life. He’s struggling to breathe on his own.

‘My baby didn’t deserve it. I miss my son, I want him to be back the way he used to be.’ 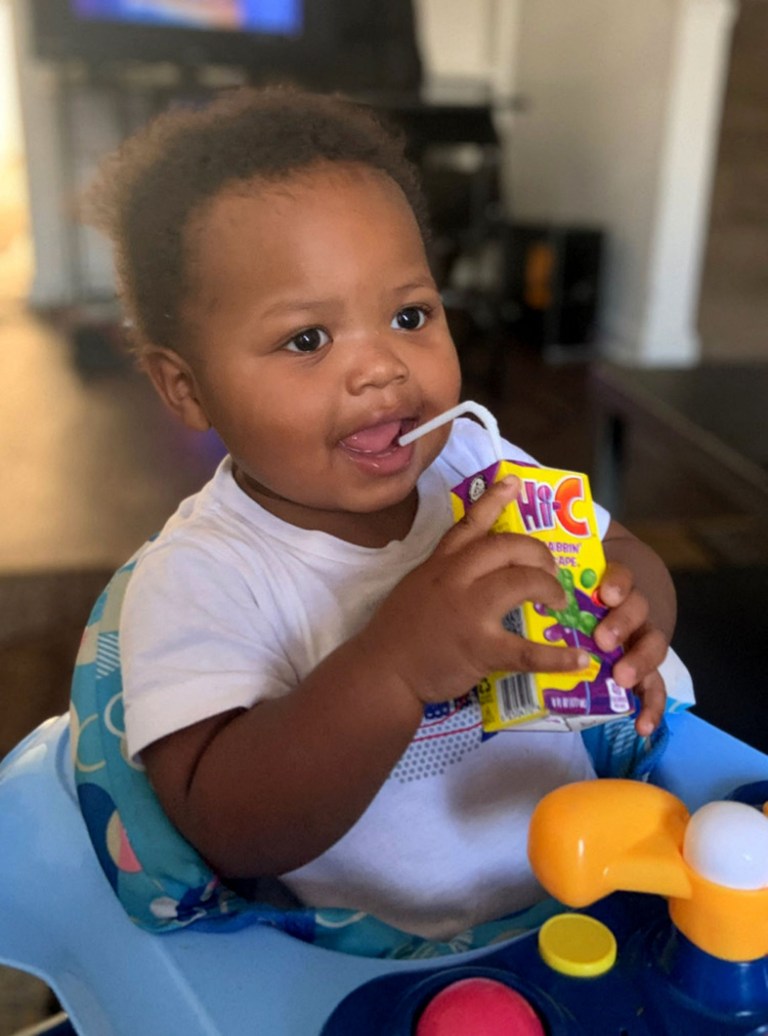 Legend Smalls was in the back seat of his mother’s vehicle when he shot (Picture: Benjamin Crump Law/Getty)

Meanwhile Houston police executive assistant chief, Troy Finne, has said everyone at the department is praying for Legend.

He said: ‘The most important thing right here, for our entire city, pray for this one-year-old and that mother.

‘Can you imagine? She’s pumping gas, probably coming from work or whatever, and has to go through this. And now she’s in the hospital and we’re all praying for that baby.’

The officer who shot the suspect and the baby has been with the HPD for 15 years and has been placed on administrative leave pending the outcome of an investigation into the incident.

Outgoing Houston police chief, Art Acevedo, has said that the case is being investigated by the HPD special investigations unite and internal affairs division, and said the findings will be released upon completion.

In a statement, Acevedo said: ‘As we said from the scene the night of the shooting, we are hoping and praying for the full and speedy recovery of the little one-year-old Legend Smalls.

‘Myself and executive assistant chief Troy Finner personally went to the hospital to check on the baby and meet with his mother.’

Peacocks has a 70% off sale and prices start from 75p