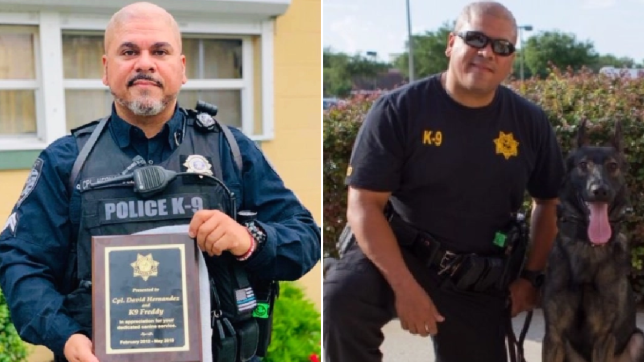 Corporal David Hernandez was fired from Longwood Police Department in Florida after hugging a colleague he knew was frightened of catching Covid (Pictures: Longwood PD)

A police officer has been fired from his job after he hugged a colleague he knew was frightened of catching Covid. Corporal David Hernandez was dismissed from Longwood Police Department in Florida after he lied about the encounter with his unnamed colleague, which took place in July 2020.

An official review of the complaint against him read ‘(The woman) told you not to touch her and physically backed away from you and crossed her arms. This was more than sufficient indication for you to know to stop trying to embrace her; however you ignored her comments and moments later embraced her.’ `

Afterwards, the woman complained and said that Hernandez had ‘disregarded her verbal instruction not to touch her, and then embraced her against her will.’ She said she had made it clear she was avoiding physical contact because she did not want to contract coronavirus.

Afterwards, Hernandez is said to have followed and taunted the woman, and also deliberately touched items on her desk to try and unnerve her. She cut her finger while trying to push Hernandez off her, with the former cop

Two witnesses saw what happened, but Hernandez denied the hug had taken place during a subsequent disciplinary hearing. That lie ultimately helped seal his fate, the Orlando Sentinel reported.

Longwood Police Chief David Dowda, who wrote the review, said Hernandez had broken policies on safety and harassment, as well as the rule banning employees from lying.

He said the disgraced cop’s behavior also displayed ‘elements of the crime of battery.’

Hernandez still has the chance to fight for his job at an upcoming arbitration hearing.

His lawyer did not comment on whether the cop plans to do so.

How to give your partner a good (and safe) massage