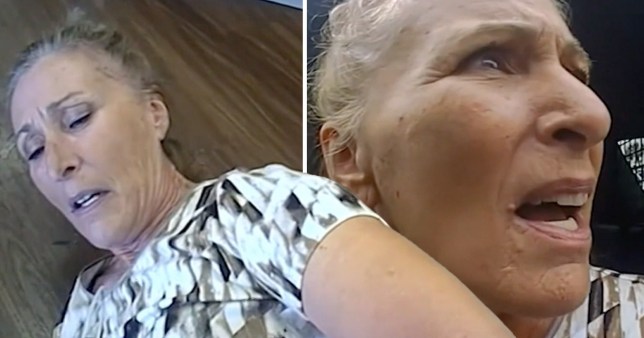 The incident ended with the woman on the floor complaining of police brutality (Picture: Galveston Police Department)

A maskless woman who refused to go outside goaded a US police officer by asking: ‘what are you going to do, arrest me’, and was then handcuffed while struggling on the floor.

An arrest warrant has now been issued for a 65-year-old lady following the Thursday altercation at a Texas bank, which was recorded on body camera.

Footage shows the woman repeatedly refusing to go outside after being told to put a mask on, claiming she does not have to wear one in public. The police officer points out that the bank is a private business before she appears to move her hand towards what seems to be his gun.

The Covid-denier, who has since spoken publicly of her belief in a ‘plandemic’, is then handcuffed on the floor as the officer tells her to ‘stop resisting’. The woman shouts about ‘police brutality, right here people’, to which stunned mask-wearing onlookers chorus ‘no, no it is not’.

She then labels them ‘sheep’ and later asks people to ‘help me’ in Spanish.

Police have since issued a warrant for the arrest of Terry Wright, 65, of Grants Pass, Oregon. The force says the charges are resisting arrest and criminal trespassing.

The incident at a Bank of America in Galveston comes after Texas Governor Greg Abbott ended state-wide orders requiring people to wear face masks in public places on Wednesday, declaring that businesses should decide for themselves what Covid-19 precautions to take on their properties.

Many businesses have kept mask rules in place.

Police said a bank manager called police after Wright refused to wear a mask while inside, and then refused to leave the building when asked.

In the video, Wright can be seen standing in the middle of the bank’s lobby, surrounded by other customers, all of whom were wearing masks.

Wright told the officer she had come to the bank to make a withdrawal.

The officer asked her to go outside or put on a mask. She refused.

‘What are you going to do, arrest me?’ she asks.

He replies: ‘Yes, for intruding on premises’, to which she says: ‘That’s hilarious.’

After she was handcuffed, she complained that ‘I think you broke my friggin’ foot’.

Police said she suffered minor injuries during the struggle and was taken to a hospital for treatment.


Wright told The Washington Post that she has never covered her face inside stores, even when the state-wide law was in place. She said she was in an RV park across the bay from Galveston in Hitchcock, Texas.

She told the newspaper she was ‘attacked’ and compared mask requirements to the way that Nazi Germany forced Jewish people to identify themselves with a Star of David.

Wright also said she believed in a ‘plandemic’ in a reference to a documentary-style video in which an anti-vaccine activist promotes a string of questionable, false and potentially dangerous coronavirus theories.

The USA has the highest death toll from coronavirus of any country in the world and the wearing of masks has become politicised, with many refusing to believe that it stops the spread of the virus.

Call of Duty deletes 30,000 players in shock mass-ban – and says MORE are coming