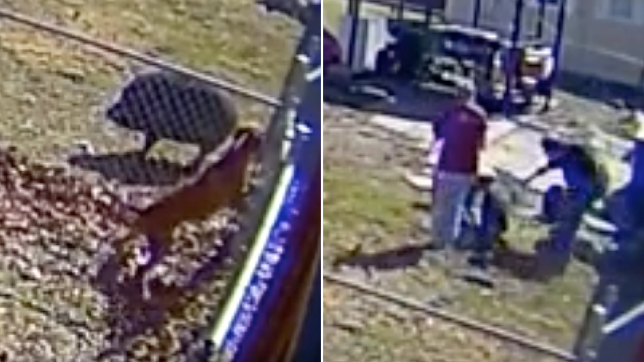 Police have backed a man who attacked his neighbors’ pit bull with a machete for mauling his pet pig – and have punished the dog’s owners instead. Paul Decker has defended his decision to hack at the bloodthirsty dog, named Joe, after it escaped its yard and savaged his pig for the second time.

Paul, from Pleasant Valley in Missouri, said: ‘What if it was a child? What if it was one of my grandkids? It’s the second time that this dog (jumped) the fence and just (tore) this pig up.’ The disturbing mauling was captured on camera, and showed Joe barking at the pot bellied pig from the other side of a chain-link fence.

Moments later, the crazed dog managed to get under the fence and ran after the pig, before sinking its teeth into the pet’s behind. The pig’s bloodcurdling screams could be heard ringing out across the garden, before Paul and Joe’s owner both ran to separate the animals.

Joe was left with cuts that needed staples and stitches, and is now at a boarding facility. Pleasant Valley Police have confirmed that the earlier mauling was reported to them, and say Paul will face no charges over the latest incident.

They added that Joe’s owners have been cited for letting their dangerous dog escape their property.

Joe’s owner, who did not want to be named, moaned about the attack, telling Fox4: ‘It was terrifying. Having somebody wield a machete at your dog as you’re trying to grab the dog away from what it’s attacking, that’s terrifying, especially considering I could’ve been hit.’

But she conceded that Joe’s behavior was to blame for the incident, and apologized. The woman said: ‘It doesn’t sound good, and it’s really not. It’s horrible. We’re sorry that Joe did it in the first place both times.’

Kansas City animal expert Tori Fugate called on dog owners to keep a close eye on their pets, and said humane tethers are available which can keep pets confined to their yard.

She added: ‘You just never know if an animal is going to get distracted and run off. If they’re in a community.

‘ We don’t want animals to get hit by cars, things like that, or run into other people’s yards, run through the neighborhoods, because then you have a lost pet on your hands.’