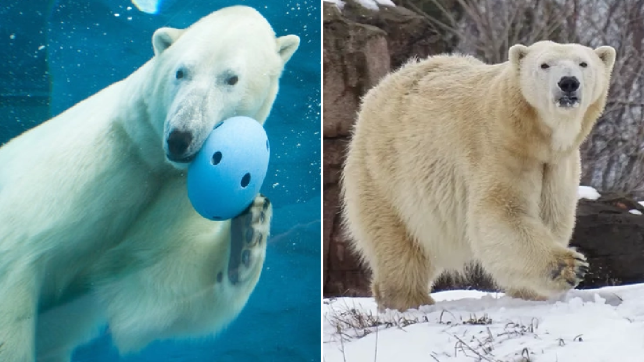 A male polar bear called Nuka, left, killed his partner Anana, right, just days after the animals were reintroduced to each other in the hopes of them breeding (Pictures: Detroit Zoological Society)

Further details on how Anana died were not released by zoo officials. Spokesman Scott Carter said: ‘This was completely unexpected and the Detroit Zoo staff is devastated by the loss of Anana in this sudden and tragic event.’

Anana and Nuka were first introduced to each other in 2020, but were then separated again for undisclosed reasons. They were reintroduced again last week, with Anana killed by Nuka days later, The Detroit News reported.

Zoo officials had hoped the animals would successfully breed as part of the Association of Zoos & Aquariums’ Polar Bear Species Survival Plan. That aims to boost numbers of the endangered creatures, whose natural habitats are being destroyed by climate change.

Nuka had previously impregnated multiple other female polar bears ‘without showing harmful behavior.’ Polar bears have been known to turn on each other, with some adults eating cubs in the wild due to food shortages caused by melting ice.

She is currently caring for one of her two cubs in a private enclosure, with the other baby bear being raised by zoo staff.