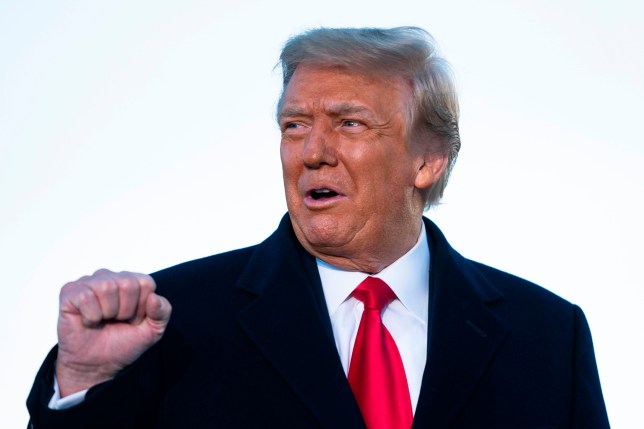 Donald Trump’s birthday could be named ‘Donald Trump Day’ to honor his presidency, if two Ohio Republicans get their way (Picture: Getty)

Politicians have called for a ‘President Donald J Trump Day’ to commemorate the man they claim was one of the greatest leaders in US history. Jon Cross and Reggie Stoltzfus, Republican Representatives from Ohio, have called for June 14 – Trump’s birthday – to be renamed in his honor in their home state.

The pair said that doing so would ‘celebrate one of the greatest presidents in American history.’ In a letter to The Columbus Dispatch, they added: ‘Let’s show the 3,154,834 Ohio voters who cast their ballot to re-elect Donald J Trump that we as a legislature recognize the accomplishments of his administration.’

If green-lighted, Trump would join predecessor Barack Obama in being the only living president to have a day named in his honor, with Illinois naming August 4 Obama Day.

But the motion already faces fierce criticism, as it would usurp Flag Day, which honors the 1777 creation of the Stars and Stripes.

Jeff Crossman, a Democrat Representative from Ohio said: ‘I don’t like the idea of changing an existing federal holiday that honors the flag. I think it’s disrespectful.’

It is unclear when a motion to name the day in Trump’s honor will be put forward.

Trump has kept a low profile since leaving office on January 20. His office released a statement last week claiming he is more popular among supporters than ever.

The former president looks increasingly likely to escape a conviction which would bar him from running from office in the 2024 election.

Just five Republicans have so-far indicated plans to turn against their former president, with a further 12 needed to convict him.