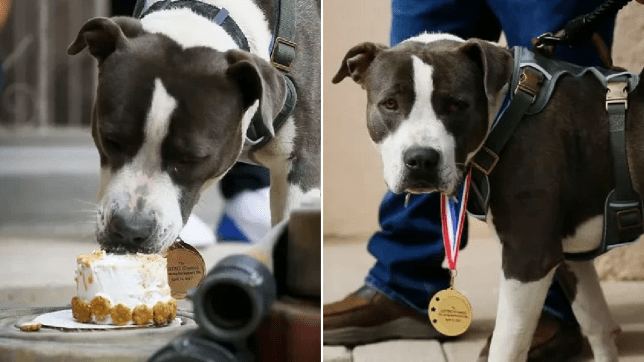 Pit bulls may be perceived by some as a threat, but one of them, Astro, proved himself to be the exact opposite. The American Pit Bull Terrier alerted a neighbor that his owner was having a medical emergency, saving his life.

Astro’s act was so heroic that the El Paso Fire Department and El Paso Animal Services in Texas on Friday presented him with a certificate of recognition and a dog cake. Astro was with his owner when he sensed that his human friend was not feeling right.

‘He started barking, he started running around and that’s when a Good Samaritan saw him’, El Paso Fire Department spokesman Enrique Duenas-Aguilar told KTSM on Sunday. ‘He decided to get closer thinking the dog was in trouble, but then Astor would keep moving until eventually he led the person the patient’.

Astro even tried to climb into the ambulance with his owner, according to Duenas-Aguilar.

‘Firefighters had to lure him into a vehicle for family members to come and pick him up’, the spokesman said. ‘Without his help the patient might have never been found’.

The medical condition of Astro’s owner was not disclosed due to privacy policies, but the family indicated he is stable and recovering. The family did not train Astro to respond the way he did in an emergency situation, making his response even more admirable.

‘We never thought in a million years he’d do something like that’, the owner’s mother, Bertha Martinez, told the TV station. ‘I’ve always been scared of pit bulls and when we brought him home I wasn’t sure we’d keep him for a long time cause he was going to grow up’.

Astro was a stray dog that the family adopted about a year ago. Martinez has no regrets.

‘If you treat him well and don’t harm them or anything then they become what he is’, she said.