This is the shocking moment a 91-year-old Asian man was violently pushed to the ground in an unprovoked attack that has been described as a racist hate crime.

Disturbing surveillance footage shows a man – who is now wanted by police – walking up to the pensioner in the middle of the street and forcefully shoving him over.

The footage shows the elderly man hit his head on the floor and lie motionless on the pavement as the culprit casually walks away.

The appalling assault took place on Sunday in the Chinatown area of Oakland, California and was shortly followed by similar unprovoked attacks on a 60-year-old man and a 55-year-old woman later the same day.

All three victims required treatment in hospital and local police have since released photos of a suspect wanted in connection with the assaults.

Oakland Police describe the male suspect as in his 20s, standing about 5ft 6in to 5ft 10in tall and weighing 140 pounds. Surveillance photos showed the suspect was wearing a black and blue hoodie, tan pants, a face covering and gray tennis shoes with light green soles. 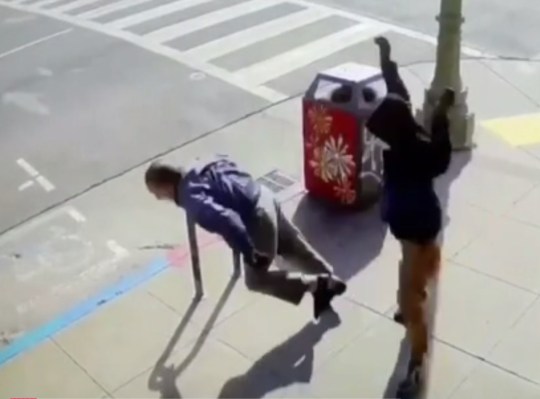 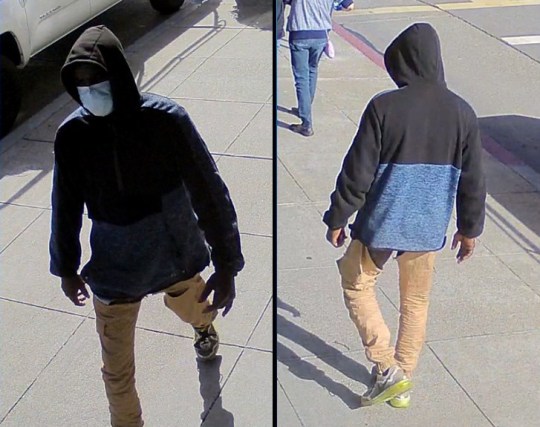 The suspect wanted by Oakland Police in connection with the three attacks (Picture: KPIX 5)

The crimes come amid a concerning rise in attacks on Asian Americans in Oakland’s Chinatown district over the last few months, reports KPIX 5.

Only last week an 84-year-old Asian man, Vicha Ratanapakdee, sadly died when he was also pushed to the ground in the street. Video footage showed a man charge at him unprovoked, knocking him to the ground and ultimately killing him.

Antoine Watson, 19, of Daly City was arrested at the weekend in connection with Ratanapakdee’s death.

His family said they believe racism fueled the attack, according to his daughter, Monthanus Ratanapakdee. 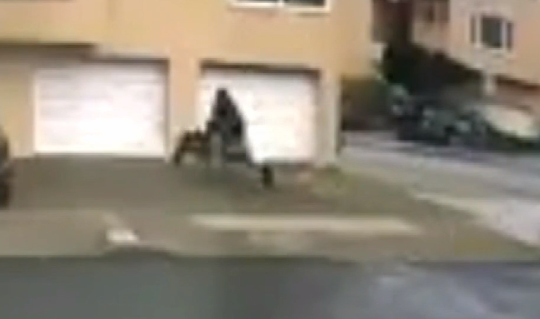 She said: ‘When people saw me because I’m Asian they … blame me that I bring the Covid to this country.’

Carl Chan, president of the Oakland Chinatown Chamber of Commerce said the attacks are hate crimes against the Asian-American community.

He said: ‘This is something we must change and change it now.

‘Please, we are all the same. We are the people of this community.’

He added that ‘fear has grown’ within the Chinatown and has said that plans are being drawn up to plan to hand out whistles to residents to use in case they are attacked.

Cynthia Choi, co-executive director of Chinese For Affirmative Action added: ‘Our community is certainly being targeted and being blamed for Covid, and certainly anti-China, anti-Chinese, and anti-immigrant climate under the former president didn’t help the situation.’