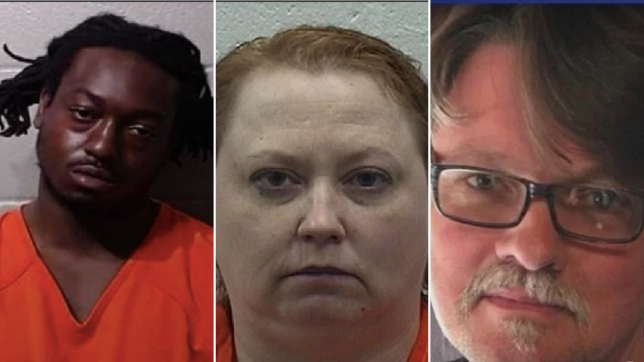 Police responded to Kristie’s home after she called 911 on Monday to report that an intruder came into her home and shot her husband. She was interviewed several times and a few days later, approached the Ada Police Department and confessed.

Kristie and Kahlil met months prior at a Super 8 Motel and they and David ‘had sex’ there ‘on more than one occasion,’ according to court documents. Without her husband knowing, Kristie gave her number to Kahlil and he stayed at her house when David was in Mexico for a mission trip. The two lovers then plotted David’s murder.

‘The plan was for Kahlil to come into the house in the middle of the night and shoot David with the gun and ammunition that actually belonged to David that Kristie had given Kahlil,’ Green said.

The day before the murder, Kristie wrote on Facebook that David sent her necklaces from Mexico and that ‘every day, I opened a card and was reminded of how blessed, loved and lucky I am.’ Kristie also wrote, ‘I love you so much, David!!!!’ However, she told the bureau of investigation that her husband would call her ‘slut,’ ‘fat,’ and ‘ugly.’

‘What she told agents was that he was verbally abusive and controlling of her,’ Green said.

Kristie and Kahlil are charged with first-degree murder.

David’s church in a statement on Friday said the circumstances ‘have taken us by surprise and we are greatly saddened.’