One dead in Peanut Festival parade with teen arrested 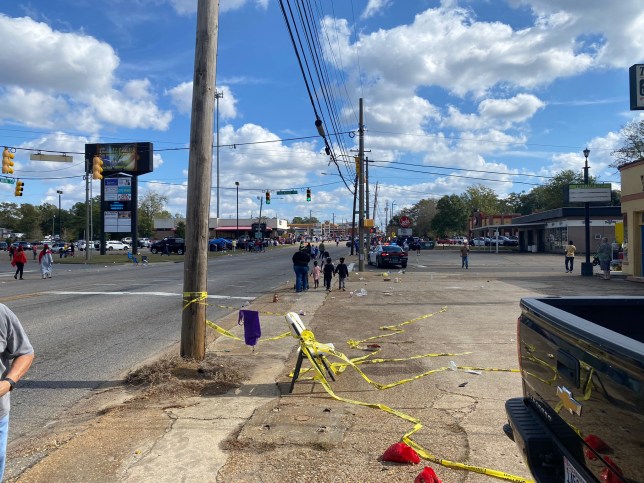 A gunman opened fire into the crowd at an Alabama peanut parade (Picture: Twitter)

A teenager was arrested after a shooting killed one person and injured another at a peanut parade.

Mekhi Nasir Lawton was taken into custody by police in Dothan, Alabama for the deadly shooting at a parade marking the city’s annual National Peanut Festival.

Lawton, 18, opened fire into a crowd at an intersection on the parade route. The shooting caused a mass panic. Parade floats were still driving past the crowd when spectators heard gunshots.

‘This is the most chaotic scene I’ve ever been involved with,’ Dothan Police Major Will Glover said.

Police were able to identify Lawton quickly thanks to tips from the community. He was charged with one count of murder and one count of first-degree assault. His bail was set at $1.53million.

The deceased victim was identified as Garyoun Tyrone Fluellen. He was shot once in the upper torso.

Fluellen, 22, was pronounced dead at a local hospital.

The second victim has not been identified. They sustained two gunshot wounds to the chest. They were also taken to a local hospital, where they received emergency surgery and are now in stable condition.

Police believe the shooting started after a fight began between spectators.

‘We have no reason to believe that this incident is any way connected to the Peanut Festival, rather this lawless behavior by individuals with no regard for anyone else took place where thousands of people gathered to watch a parade,’ Dothan police stated.

The National Peanut Festival is celebrated annually to mark the harvest season. The parade is part of the ten-day event that attracts 200,000 tourists a year, according to the festival’s website.

Dothan is known as the ‘Peanut Capitol of the World.’ The majority of the US peanuts are grown in a 100 mile radius from the city, according to the festival.