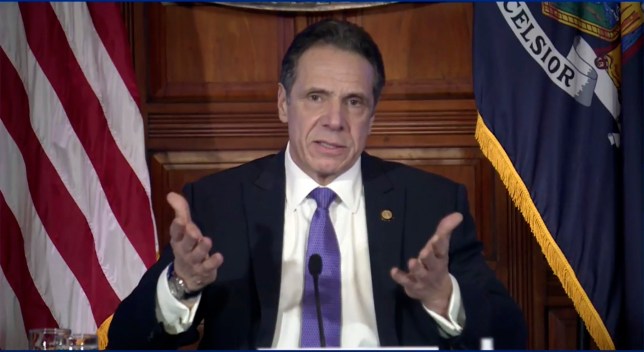 A majority of New York Governor Andrew Cuomo’s fellow Empire State Democrats have called for him to resign after six women accused him of being a sex pest (Picture: AP)

A politician branded a hero for his handling of the Covid crisis faces career ruin after colleagues called for his resignation over sexual harassment claims. New York Governor Andrew Cuomo’s position looked untenable Friday after 10 Democrat representatives from the Empire State called for him to go.

That is more than half of the 19 congressmen and women who represent Cuomo’s Democrat party in New York state. They included longtime friend Jerry Nadler, and rising Democrat star Alexandria Ocasio-Cortez.

Nadler’s statement said Cuomo, a fellow Democrat, was ‘guaranteed due process under law.’ But he added: ‘Governor Cuomo has lost the confidence of the people of New York. Governor Cuomo must resign.’

If Cuomo refuses to resign, he is likely to face impeachment proceedings that could see him kicked out of office by a vote.

Six women – five of whom worked for Cuomo – have come forward to accuse him of sexual harrassment. The most recent, whose allegations were published by The New York Times on Wednesday, accused the governor of reaching under her blouse and groping her breasts at his official mansion in Albany.

Cuomo, whose late father Mario also served as Governor of New York, has denied the allegations against him, but apologized for making people feel ‘uncomfortable’ in a statement issued last week. 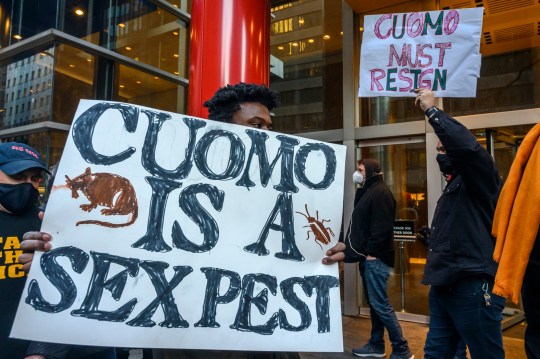 Cuomo has denied the allegations against him, but most of his colleagues now say he is undermining trust in the Democrat Party (Picture: AP)

The former New York Attorney General – the state’s top prosecutor – was first elected governor in 2010, and has won re-election twice since.

Cuomo is due to hold a ‘fireside chat’ on New York’s Covid vaccination efforts on Friday evening. If he ends up resigning, it will mark a shattering end to his career just months after he became a national hero for his handling of coronavirus.

The Empire State has since largely reopened, while managing to keep infection rates low, and has vaccinated around 20% of its 22 million residents.

That saw him detail how he had tackled Covid in New York, despite himself admitting that the outbreak was far from over.

But that saw Covid spread like wildfire among vulnerable residents of the facilities, and a huge death toll.

Cuomo admitted withholding data on the true scale of nursing home deaths until after Joe Biden was elected, over fears ex-President Trump – one of his most vocal political enemies – would launch a government probe into him.