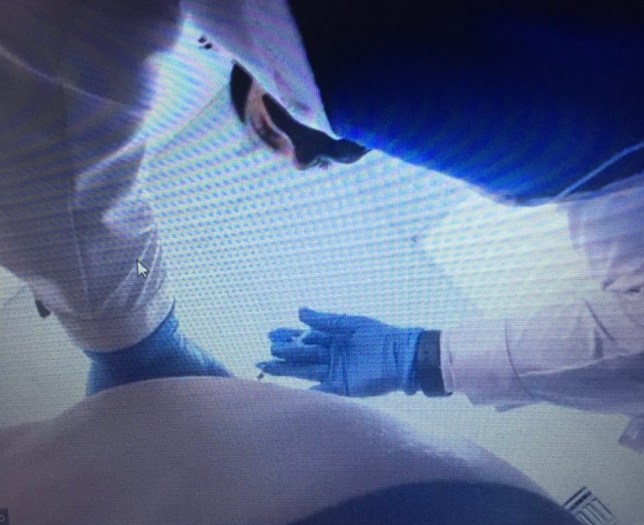 Zoom captured the moment that Niurka Aguero stuck a syringe into a man’s butt while awaiting her virtual court hearing (Picture: David Ovalle)

A nurse was filmed administering an injection on a man’s buttocks while she waited for her virtual court hearing for a grand theft charge to begin. Niurka Aguero had the live stream running as she stuck a syringe into the man’s exposed butt during the Miami-based hearing on Wednesday.

Among those who saw the strange scenario unfold was Miami Herald reporter David Ovalle, who tweeted a screenshot of Aguero as she pricked the man’s behind.

‘Someone appears to be getting a butt injection while appearing in a virtual court hearing’, Ovalle wrote.

‘It’s my understanding that the defendant was actually the nurse or whoever was giving the injection, which actually makes it a gazillion times more bizarre’, Ovalle told The Hill in an email.

MIAMI ZOOM COURT: Weâve reached peak 305. Someone appears to be getting a butt injection while appearing in a virtual hearing pic.twitter.com/2bRK3IATQz

Miami State Attorney’s Office spokesman Ed Griffith confirmed that the Aguero injected a patient while waiting for her case to be heard.

‘It seems that during the waiting period prior to the case being brought before the judge, Niurka Aguero was involved in some kind of procedure involving a male receiving an injection in the buttocks, which she appears to have inadvertently broadcast (via Zoom)’, Griffith told the Daily Mail.

‘Needless to say, it appears that everyone involved in the Zoom court call was surprised’.

Aguero was appearing virtually for a status hearing, which is a procedural step in which prosecutors and defense attorneys provide updates on the case to a judge. She is charged with third degree grand theft. More details on the case were not disclosed.

A LinkedIn profile states that Aguero is a technician at a plasma clinic in Palm Beach, Florida.

Aguero is not the only person who has experienced an unintended embarrassing Zoom court meeting during the pandemic.

In February, lawyer Ron Ponton from Marfa, Texas, could be heard panicking and desperately trying to remove a kitten face filter on Zoom during a virtual court meeting.

‘I think it’s a filter, I don’t know how to remove it. I’ve got my assistant here – she’s trying to’, Ponton said.

Judge Roy Ferguson assured Ponton that he had not mistaken him for a kitten and instructed him on how to remove the filter. He also praised Ponton’s ‘dignity’, ‘incredible grace’ and ‘true professionalism’ around the flub.

‘These fun moments are a by-product of the legal profession’s dedication to ensuring that the justice system continues to function in these tough times’, the judge said.