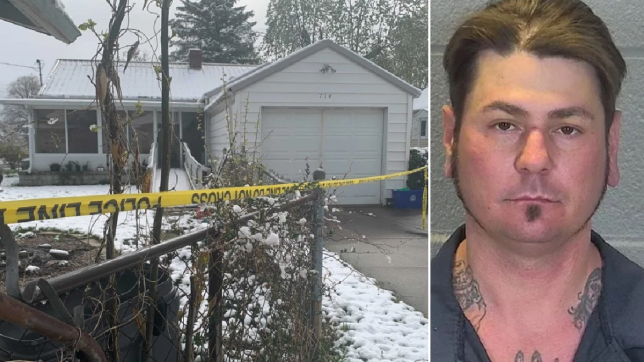 The neighbor of a nine-year-old girl allegedly lured her into his basement by telling her she could pet his dogs, then locked her in and was apparently in the act of molesting her when police stopped the murder in progress.

After the girl went missing for about 30 minutes on April 19, her parents called police, who found out from residents that her next-door neighbor James Brian Chadwell II, 42, said he saw her after she vanished. Officers went to Chadwell’s home on the 700 block of Park Avenue, a minute away from the girl’s home, and the man said she was there earlier but had left, according to court documents obtained by WTHR.

Cops kept searching for the girl and later returned to Chadwell’s home. Chadwell allowed the officers to search his house and they found a chain lock on the door to the basement, according to the Lafayette Journal & Courier. The cops broke in and heard a girl crying at the bottom of the stairs. The girl reportedly had bruises on her body and a dog bite on her leg.

Chadwell allegedly attacked and strangled the girl after she went to his home to pet his dogs and then forced her into the basement. The girl apparently told police officers that Chadwell threatened to kill her if she screamed or spoke to anyone about the incident.

During his court hearing on Monday, Chadwell asked for a mental evaluation.

Chadwell is charged with attempted murder, child molesting, attempted child molesting, battery resulting in serious bodily injury, strangulation and criminal confinement. Prosecutors filed a charge enhancing Chadwell’s sentence as a habitual offender, which could add 20 years to his sentence if he is found guilty.

The crime occurred about 20 miles away from Delphi, where two girls were murdered by the Monon High Bridge Trial.