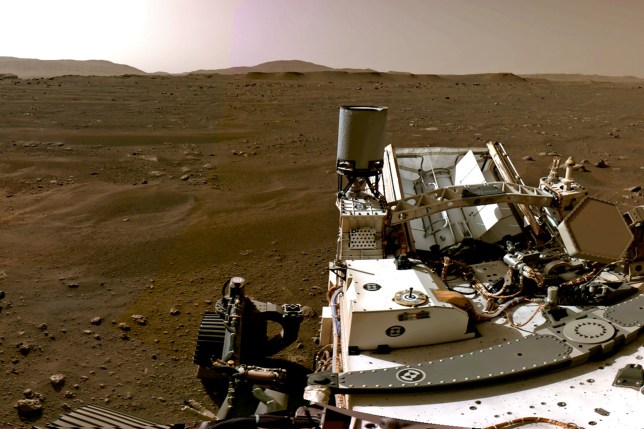 A portion of a panorama made up of individual images taken by the Navigation Cameras, or Navcams, aboard Perseverance (Reuters)

Nasa scientists celebrated the successful landing of another Mars rover by hosting an online Q&A on Reddit.

Using the website’s Ask Me Anything format, nine scientists, including landing day engineers, answered the internet’s questions about the ‘Percy’ rover.

Announcing the session, scientists said: ‘Now that the rover and helicopter are both safely on Mars, what’s next? What would you like to know about the landing? The science? The mission’s 23 cameras and two microphones aboard? Mission experts are standing by. Ask us anything.’

The rover landed on the red planet on February 18 after a 293 million mile journey.

Perseverance will search for signs of ancient microbial life, study the planet’s geology and past climate, and be the first mission to collect and cache Martian rock and regolith.

Along with the rover is the Ingenuity Mars helicopter, which will attempt the first powered flight on another world.

The group was asked about everything from the science behind the rover, to why parachute colours are chosen. 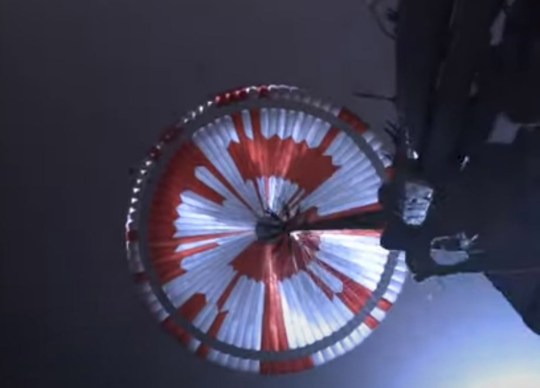 A view of the parachute that slowed the descent to the surface (Credits: EPA)

On the latter, Adam Nelessen, EDL cameras engineer, said: ‘In parachute development and testing, we have traditionally used colour patterns (typically composed of orange and white panels) to help us better understand parachute inflation from reviewing images, and we certainly took the opportunity to do that again this time.’

They were asked if the rover and helicopter will remain together at all times, to which Joshua Ravich, ingenuity helicopter mechanical engineering lead, answered: ‘Yes, during its mission of up to five flights, Ingenuity will stay within communications range of Perseverance.’

One Reddit user asked how they had managed to get a helicopter to work Mars’ ‘almost non-existent atmosphere’.

George Tahu, Mars 2020 programme executive from Nasa HQ, replied: ‘The helicopter team used classic systems engineering – breaking down all the key challenges into smaller problems to be solved. They worked with aerodynamic experts to design a rotor that could provide lift in the thin Martian atmosphere and autonomous systems that could enable controlled flight. 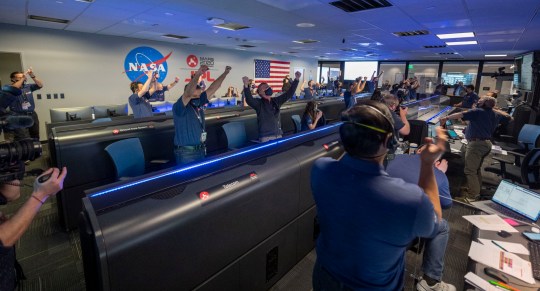 Scientists cheering the conformation that the Mars Perseverance rover touched down on the red planet. (Credits: PA)

‘It also took a lot of testing on Earth in vacuum chambers that simulated the conditions of the Martian atmosphere.’

Previously, Curiosity the rover was able to sing itself a song on its Martian birthday, so Redditers were keen to find out if ‘Percy’ would be able to do the same.

However, Mallory Lefland, EDL systems engineer, revealed the instrument suite onboard does not contain the same vibrating tubes, so it is unlikely they will be able to get it to sing.

However, she added: ‘However, our surface operations team is quite a creative and smart group of people, so they may be able to figure out something special to do for Percy’s first birthday.’

Move over Mrs Hinch, the celeb home accounts you MUST follow