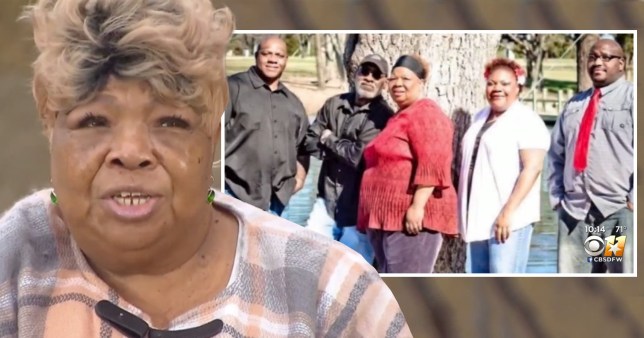 Charlotte Crawford, a mother-of-three, has said her Covid vaccine has saved her life (Picture: CBS)

A mother fully-vaccinated against coronavirus lost her husband, son and daughter – who were yet to receive their jabs – all within a three-week period.

Heartbroken hospital worker, Charlotte Crawford, has said she received her second Covid vaccine dose in January and just seven days later, her family started getting sick after contracting the virus.

Crawford, from Forney, Texas, managed to get her jabs earlier than most as she work at the local Parkland Hospital. Sadly, the rest of her family were left un-vaccinated, meaning while she was protected, the virus was able to rip through her household.

‘My son died first. My husband died second and my daughter died after that’, Mother-of-three, Crawford said, reports CBS Minnesota.

She said that her son Royce, aged 33, died after weeks in ICU. at the end of January and around the same time, her daughter Natalia, aged 38, was also admitted with damaged lungs/

Her husband, Henry Royce, was diagnosed with the virus around the same time as the couple’s children and tried to help support them through their illnesses.

Tragically, Henry Royce died from Covid two weeks after his son died, and one week later Natalia succumbed to the virus.

Crawford, who watched two of her children and her husband die from a virus that she was now protected against, has said the vaccine saved her life.

Instead of seeping in sorrow, Crawford has vowed everyone to get their Covid vaccination as soon as they are eligible.

She said: ‘I would like everyone to hear me, especially the Black community and the Hispanic community.

‘The only reason why I’m sitting here is because I got my shots. If I can help someone else to save themselves and their family, I want to do it.

‘Once this disease gets in your house, you have no control over it.’