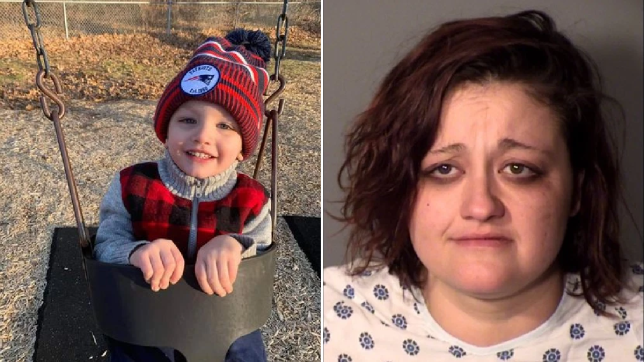 A mother told police she was ‘so excited’ that she strangled and killed her 4-year-old son and tried to stuff his mouth with CBD gummies. Tiffany Farrauto, 33, previously admitted to killing David ‘Cash’ Jasmin but a newly released arrest warrant affidavit showed how thrilled she was to commit the act.

‘I did it. I (expletive) did it!’ Farrauto said according to court documents obtained by The Hartford Courant on Tuesday. ‘I just killed my son … I’m so excited about it, too. I never thought I would do that.’

Farrauto apparently uttered the comments in the back of a cop car.

‘You can take me away … because my son is already dead and is in the house,’ she told cops, according to the affidavit.

Farrauto explained that she sinned because ‘you can do whatever you want in heaven’ and said she killed her son ‘to get back at her mother’ whom she blamed for her failures.

Police found Jasmin unresponsive in Farrauto’s apartment in New London, Connecticut, and he was pronounced dead at L+M hospital.

Farrauto told police outside her apartment that she strangled her son and also tried to fill his mouth with CBD gummies, which officers found strewn across his chest, the bedding and the floor.

Farrauto’s mother Cindy Steenson told The Day that her daughter ‘must have just had no control’ over ‘whatever happened.’

‘She never would have hurt him if she was in her right mind,’ Steenson said. ‘She never hurt anyone.’

Two mental health professionals determined that Farrauto was not competent enough to stand her criminal case and a judge assigned her to Whiting Forensic Hospital for 60 days.

A GoFundMe fundraiser set up for Jasmin stated, ‘This Angel baby deserves a beautiful service and to help eliminate any more heartache on the family.’