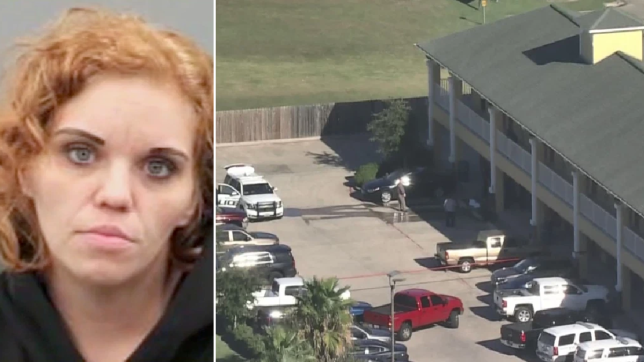 Nikki Ann Reardon, 32, is accused of putting her infant daughter’s dead body in a bag of ice at a motel (Pictures: Law & Crime/KHOU)

A mother allegedly stuffed her less than two-month-old daughter’s dead body in a bag filled with ice inside a motel room and admitted to drug dealing. Police found Nikki Ann Reardon, 32, inside the motel room after a caller reported that a baby was dead inside for more than 48 hours.

The caller described Reardon’s appearance and age to police during the call on September 29, 2020, and said the baby’s body had ‘swelled up,’ according to charging documents obtained by Law & Crime. Reardon initially ignored cops and walked to another side of the motel room in Baytown, Texas, and grabbed a weapon that looked like ‘a large rifle.’

Reardon began crying and saying ‘it was an accident’ and that she had a seizure and woke up to find ‘the baby was cold,’ according to the court records. The mother hid behind a wall before SWAT team members removed her from the room.

Officers then obtained a search warrant and found ‘a large pink duffel bag hidden inside of a built-in cabinet case,’ the records state. The bag was ‘tied in a knot’ and once unfastened, revealed the dead infant ‘covered with ice inside of the plastic bag.’

Reardon told cops she was packing her belongings in the morning as her daughter, Zaydea Danyelea Rainer, lay in bed. She then claimed she woke up in the afternoon with the baby dead and lying face down next to her.

It was ‘too late’ to call for medical responders because her daughter ‘wasn’t breathing,’ Reardon told police.

‘What were they going to do?’ Reardon said.

The mother said she held her daughter’s body for about 48 hours and that it began to ‘smell’ and ‘bubbles’ came out of the infant’s nose, leading her to ice the body.

Detectives also found ‘suspected crystal methamphetamine and suspected marijuana,’ according to the records.

Reardon is charged with endangering a child and tampering with or fabricating evidence.