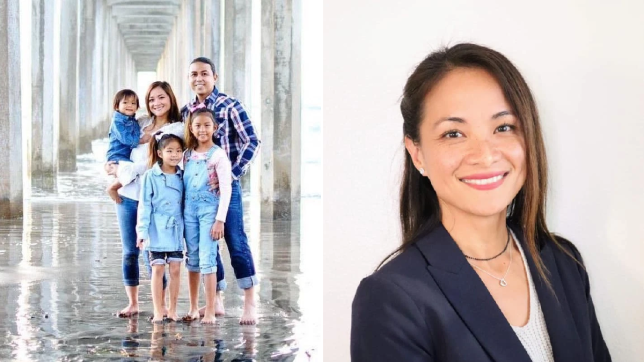 Maya Millete disappeared the day she scheduled an appointment with a divorce lawyer and has been missing for nearly four months (Pictures: Facebook)

A mother of three disappeared the same day that she scheduled an appointment to meet with a divorce attorney, a lawyer helping her family has revealed. The new detail emerges as May ‘Maya’ Millete, 39, has been missing for almost four months.

‘She filled out the form. She was going to meet with a divorce attorney. That was a Thursday (January 7),” Billy Little, the lawyer helping her family, told Fox News on Wednesday. ‘The following Tuesday was her appointment. But she filled out the entire form the day she went missing.’

Her husband, Larry Millete, was reportedly the last person to see her at their home in Chula Vista, California. He first told law enforcement officials that Maya left in order to have some alone time. However, she did not return for her daughter’s 11th birthday celebration.

Maya’s sister, Maricris Drouaillet and her husband Richard, are heading up the search for her.

‘We have an investigator and a team of investigators that we call upon when necessary,’ Thunberg said. ‘That detective has been working this pretty much full-time since the get-go.’

Little, a semi-retired lawyer and investigator with the Cold Case Foundation, said he has a good amount of information on the case and that it could lead to an arrest. He said he provided information to the police department, which declined his help.

‘There are thousands of unsolved cases out there and I don’t know why those thousands are unsolved, but this one does not need to be unsolved,’ Little said. ‘This one can be solved.’

Thunberg said the police department did not want to jeopardize the case in the event that it goes to court, that it was not criminal and that there were no suspects as of Monday.

Teen, 19, dies in hospital days after car with five women in it smashes into lamppost while being chased by police