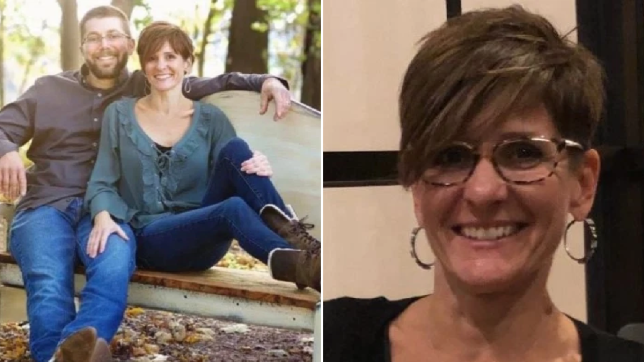 A man with road rage allegedly rolled his window down and shot into a vehicle, killing a mother of six who was on her way to a beach vacation. As dying victim Julie Eberly, 47, and her husband pulled over on the highway, the suspect sped off – and still hasn’t been caught.

Julie was traveling on Interstate 95 north in Lumberton, North Carolina, on Thursday when her vehicle came close to the suspect while merging into a lane.

‘The suspect vehicle then came alongside the victim’s passenger side,’ the Roberson County Sheriff’s Office wrote in a Facebook post on Friday. ‘The suspect rolled down his window and fired multiple shots into the passenger door, one of which struck Julie Eberly.’

Her husband, Ryan Eberly, was not shot or hurt. Julie received medical assistance at the scene and was transported to UNC Health Southeastern, where she died of her injuries.

The Eberlys were ‘an innocent family from Pennsylvania’ on their way to the beach for a vacation, Robeson County Sheriff Burnis Wilkins said in a statement.

‘Thankfully they had left their six children at home with grandparents but now these kids have to live with the thought of their mother being murdered on in such a cowardly and senseless way,’ Wilkins stated. ‘My heart goes out to this family and I ask that everyone reading this stop and pray for this entire family.’

The suspect was described as black with dreadlocks. He was possibly driving a 2010 Chevrolet Malibu or Impala that was silver or gray with tinted windows and chrome along the window frame.

Anyone with information is asked to contact the sheriff’s office.

A GoFundMe account for Julie states she was ‘a beautiful, loving, generous, and giving person.’

‘Our dear Julie was taken too soon in a senseless shooting incident,’ the page states. ‘We will be using the funds to help others and to give to the organizations that were close to her heart.’